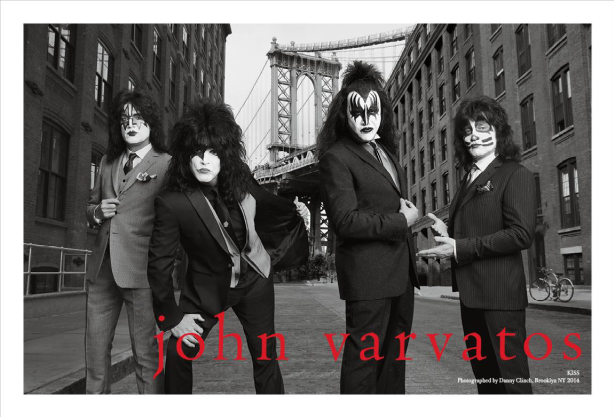 “I wanted to sprinkle a little magic dust throughout the clothes in this collection, highlighting the idea of sartorial daring and masculine confidence that is integral to my vision, bringing it a new level,”   Varvatos says.

The newly inducted Rock ‘n’ Roll Hall of Fame band will be the cartoonish face  for the new Spring/Summer 2014 Varvatos Men’s Collection.  The  campaign,  was inspired by the cover of the band’s iconic album cover for Dressed to Kill.

The new images for the collection were shot by famed Rock photographer Danny Clinch in DUMBO, Brooklyn and depict the band members in timeless Varvatos tailored clothing. Regarding the inspiration for the collection, John Varvatos says, “Over the years in our iconic music campaigns we have chosen artists that are groundbreaking and innovative. This season I was inspired by those qualities, but also one other: the idea that every man at some point wants to be a super hero. KISS is that and more for me. They have broken every rule possible, enduring like no other band in music history while transcending every generation. Their super hero personas are timeless. Creating a Dressed to Kill campaign of KISS in suits has not only been a highlight in my career, but my life.

“John Varvatos is the epitome of rock n‘ roll fashion and we couldn’t be more honored to be a part of his legacy. The work of John and Danny is enduring, as is our music.” says Kiss co-founder and guitarist, Paul Stanley.

Frontman, Gene Simmons adds, “We’ve seen a lot, but this was an exceptional experience, the still photography shoot in Brooklyn and our first performance, a secret show, at the former CBGB was something that even we will never forget!”

“Knowing that some of the band was originally from Brooklyn, I thought it was an appropriate location to shoot their portrait,” says Clinch. “When I learned KISS would be featured in the next campaign, I could immediately see it in my mind. Shooting with the Manhattan Bridge in the background added to the classic Dressed to Kill‘ vibe.”