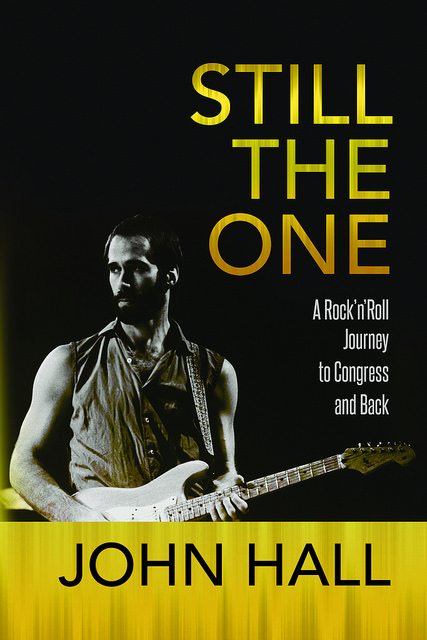 Born in Baltimore and raised upstate in Elmira, John Hall’s music career kicked off in the late 1960s when his band Kangaroo signed to MGM Records. John continued to knock around New York after things did not happen as planned for Kangaroo, writing and/or playing with the likes of Janis Joplin, Bonnie Raitt, Seals & Croft and Taj Mahal. In 1972, John founded the band Orleans, which went on to have a pair of Top 5 hits that are still heard often today, “Dance With Me” and “Still The One.”

After leaving Orleans in 1977, John Hall became active in the anti-nuclear movement and co-founded Musicians United For Safe Energy. However, music stayed in forefront as The John Hall Band formed and released two albums via EMI America. John also continued to create for other artists, co-writing Steve Wariner’s #1 country hit “You Can Dream Of Me.” Along the way, John helped form two citizens’ groups, Saugerties Concerned Citizens and the Winston Farm Alliance. This involvement led him to serve one term in the Ulster County Legislature and to be elected to the Saugerties Board Of Education twice.

In 2006, John put politics in the forefront, running for Congress in the 19th District. He served his district from 2007 to 2011, only the third Democrat to represent it since World War I. While in office, Senator John Hall voted for the Healthcare Reform Bill, which led to what most people know as “Obamacare.” He had served on the House Committee On Transportation And Infrastructure and was chairman of the Subcommittee on Disability Assistance & Memorial Affairs.

Post-Congress, John remains active as a musician. His most recent project, however, is the memoir Still The One: A Rock’n’Roll Journey to Congress and Back, which looks back at both his musical and political careers. John spoke to Downtown about his new book and more. John can be visited online at www.johnhallmusic.com.

How did the opportunity to write a book come about? Or was this a case of you writing one and then shopping it?

John Hall: My friends and family were hearing bits and pieces of these stories, and always said, “You should write a book!” I decided to self-publish after my agent was hired by Oprah to be Book Of The Month Club editor. I spoke with other agents and a couple of publishers and quickly decided that if I want this book our while I’m still on solid food, I should put it out myself. (laughs)

Was there a part of the book that was difficult for you to write?

JH: The most difficult part to write was the part about my brothers and parents dying. Sometimes putting events on paper actually makes them seem more final and immediate at the same time.

Is there a musical accomplishment you’re most proud of?

JH: My proudest moment as a musician was playing in Japan and hearing thousands of audience members singing along word for word. The international, pan-lingual reach of a song is a miraculous thing.

Is there a political accomplishment you’re most proud of?

JH: My proudest moment as member of Congress was negotiating and passing the Affordable Care Act — the best compromise available at that time to move us closer to universal health care.

Where was the first gig you ever performed in Manhattan? What do you remember about it?

JH: First gig in Manhattan was as the Cafe Wha? What I remember is Jimi Hendrix coming in and sitting in the front row for a whole set. It’s in the book, of course.

When might you be performing in New York City next?

JH: As soon as our agent or manager put a show on our calendar.

Some of your music has been referred to as “yacht rock” in recent years. Is this something you find humor in?

JH: “Yacht rock” or “sail rock” is appropriate for me, given how sailing has been a life-long passion. It has been 10 years since I’ve owned a boat, except for the windsurfer I can throw on top of my car and launch in any body of water. Small yacht, but fun.

JH: Playing guitar, writing, walking our dogs, hanging out with Melanie, my wife of 15 years.

Finally, John, any last words for the kids?

JH: The book ends with a last word for the kids. It’s their world, and their kids and grandkids. I hope we are doing enough to keep it habitable, but at any rate there is plenty they can do. First, educate themselves as thoroughly as possible about energy and climate change and how our move to renewables has to come fast. And the political torch is about to be passed to them.