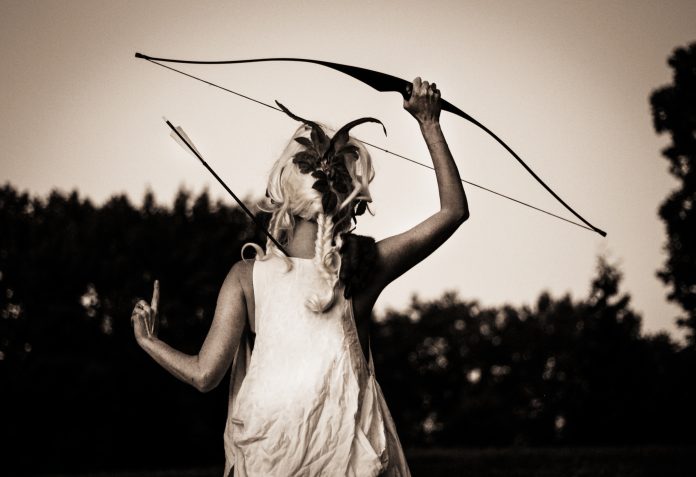 Listening to the opening strains of a Searmanas song is like falling into a murky pool of lucid dreams. The ethereal vocals of Niabi Aquena gently sprinkle cinematic fairy dust over her lush soundscapes. Her work has been described as “etheric darkwave,” with nods to Sigur Rós, Fever Ray, and composer Jóhann Jóhannsson.

Searmanas (pronounced SHA-mah-nas) is the Irish word for “ceremony.” Much of her poetry explores nature and ritual through unusual sonic channels; for instance, she used the radiotelephony spelling alphabet in her song Opening With Phonetics. Aquena’s live performances transform her into a priestess solemnly creating altars of noodly wires and sound waves.

“I love the exploration of the role of ceremony within both urban and rural experience,” says Aquena.  “I like showing, not telling. I’m inspired by intensity and poetry. I’m a romantic.”

Although she has called NYC home for two decades, Aquena originally hails from the Shenandoah Valley of Virginia, where the oldest mountain ranges found on earth surround the region with rolling hills and green pastures. Many of her atmospheric progressions sonically mimic that landscape.

“I grew up in this beautiful place feeling as an outsider and a weirdo,” Aquena explains. “My mom named me from a New Age baby name book she found. I was 5’9” at age twelve; I had flaming red hair. I was different, and in rural Virginia, that was not accepted. This led way to a vulnerability founded in mettle.”

Aquena has since struck an intriguing balance with her place as a metropolitan artist, and the acknowledgment of the pastoral beauty that shaped her youth, through her mystical lyrics and transcendent electronic experiments. She is a unique fixture in the New York music scene, having shared the stage with other electronic visionaries like John Bender and Hieroglyphic Being.

“The city certainly has taken my heart, and the rhythm of this place motivates me to my core.”

Since debuting Searmanas in 2016, Niabi Aquena has been signed to Cleopatra Records and taken her project on tour all over the Midwest and East Coast. Aquena describes tour life as “grueling, but very rewarding.” On the last leg of a major tour, however, a minor crisis struck.

“I got bitten on my eyelid at someone’s place and my eye swelled up. I looked terrible but was playing a show that night. The only solution I could come up with after hot compresses failed me, was an eyepatch! The pics from that show turned out cool though, so now I’m asked when I’m bringing the eyepatch back…although it most certainly wasn’t a fashion statement!”

Aquena has lent her considerable talents to other bands such as Dead Leaf Echo and Textbeak, but she has many more plans for her solo project.

“I’m waiting on getting a pedal. It takes the firmware from one of my favorite modular synths, but in a stompbox. Earlier this year I taught myself guitar, so I’m thinking of incorporating these two loves, modular synthesis, and guitar, together for the next iteration of Searmanas.”

Check out Undo by Searmanas here: