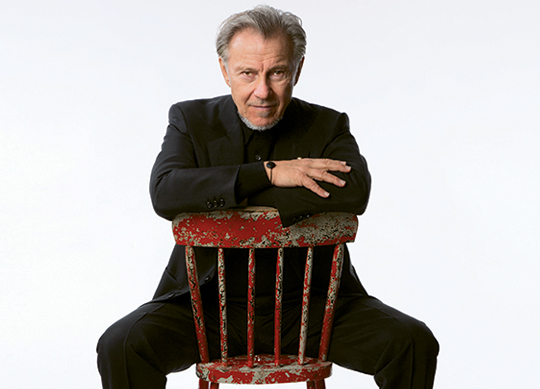 HARVEY KEITEL IS ONE OF THE MOST RECOGNIZABLE FACES AROUND, BUT HIS BEST ATTRIBUTE IS HIS HEART BY MIKE HAMMER Photographs by Leslie Hassler Everybody thinks they know Harvey Keitel. He’s the quintessential tough guy; the third member of the wise guy cinema’s Holy Trinity with Martin Scorcese and Robert De Niro. He’s everybody’s favorite neighborhood gangster from Mean Streets. The bad-ass bank robber from Reservoir Dogs. Oh yeah… wasn’t he that scary cop from The Bad Lieutenant? But if that’s your impression of one of America’s greatest actors and nicest guys, you’re barely scratching the surface, buddy. “No one ever became a true artist by doing just one thing,” says the iconic New York personality whose work has extended far beyond the great Scorcese, and life experience stretches beyond Mean Streets.   The Brooklyn-born, long-time TriBeCa resident relishes his diverse career and life experience, and remains determined to continue to learn and evolve with each passing day. “As actors, we’re all looking for something,” he says as people look to catch a quick glimpse of one of the big screen’s most recognizable actors at his favorite neighborhood eatery—Robert  De Niro’s Nobu. “How do we live? How do we grow? What does it mean to be heroic? How do we cope with failure? As the Buddhists say, ‘The journey is the real experience.’” Keitel’s journey reads like a movie script in itself. Born and raised in Brooklyn, he was a typical doo-wop-loving, school-skipping child of the ’50s. “They politely asked me to leave school, because I barely showed up anyway,” he admits. “I needed to do my learning elsewhere, and that’s how I wound up in the Marines.” That journey took him to Lebanon, leading patrols in what was an unstable region then, as it is today. “I have to smile about it, because the reality was that me and my fire team of three guys were all that stood between the Arab League and Beirut. Luckily, they never decided to attack.” But if they had, they would have had a fight on their hands with a Marine who believed in what he was doing there. “It truly is a special experience to put yourself in harm’s way in the interests of protecting oppressed people,” he says. “That was a very positive experience for me.” Harvey Keitel is the cover of DOWNTOWN’s Spring 2014. If you would like to continue reading the entire interview with Harvey Keitel, you can find our latest issue on newsstands.