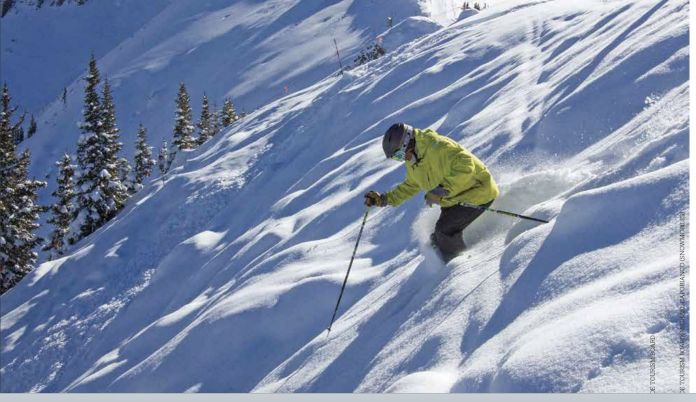 Photogrphy courtesy of Telluride Tourism Board

IT’S A COOL MORNING in the alpine city of Telluride, Colorado. I’m sitting in the lobby of the Hotel Telluride doing an equipment check before preparing to climb up a frozen waterfall. It’s almost time for the featured event of Two Picks and a Prayer, an adventure package designed to showcase Telluride’s world-class ice climbing. The lobby’s knotty pine walls, embroidered pillows, and plush furnishings feel like European chalet meets the Old West. The ice climbing guide from San Juan Outdoor Adventures gives the go ahead, and we load into the van to head off to nearby Ames Valley—a location famed for both its ice climbing, and the origins of electricity. Ames was the site of the first commercial plant to produce Alternating Current (AC) for industrial use. After a short hike, we arrive at the base of the Lower Ames Falls.

Two Picks and a Prayer introduces beginners to ice climbing, and our half-day adventure starts with some training. With a bit of coaching and concentration, I adjust my climbing technique quickly, feeling more comfortable with the idea of suspending myself vertically against a solid sheet of ice. As the cheering of support grows more distant my confidence increases—the glory of the summit is near. Pushing my nerves aside, I finally arrive at the top and I’m greeted with a spectacular view, a brisk wind, and a tremendous sense of accomplishment.

Two Picks and a Prayer is one of many experiences offered by the Hotel Telluride. The hotel has the vibe of a Victorian luxury resort, with rooms styled in what could only be called western chic. When guests aren’t preparing to head off to the ski slopes or ice wall, they can enjoy chef Chad Glidewell’s delicious fare in the West End Bistro, lounge in the hot tub, indulge in a spa treatment, or help themselves to an afternoon batch of freshly baked cookies. Each of the 56 rooms at Hotel Telluride offer a private deck and view of the surrounding mountains, and pets are welcomed with a gift of homemade organic treats on arrival.

Telluride sprang up in the 19th century because of a nearby silver mine. It’s a year-round sport paradise, but is famous for its ski slopes and for having the largest collection of 14,000-foot peaks in North America. The quaint city of only 2,600 residents looks like a movie set. As I wandered around I was sure that someone was about to scream, “Cut!”

After exploring the town, take the free gondola up to the Mountain Village to take in the views from above. Tours are available at Wagner’s Custom Ski factory. You can join the skiers defrosting at the Telluride Distilling Company, or rent a fat-tire bike and ride to Telluride Brewing Company. Don’t miss their famous Face Down Brown Ale. I was still enjoying my ice climbing adrenaline rush, so I chose to take a wild ride on a snowmobile through Beaver Park, offered by Telluride Outside.

While Telluride is known as a ski resort getaway, there’s plenty to do aprés ski (or INSTEAD) as well. When you are finished with one of the action-packed adventures offered by Hotel Telluride, you can check out the city’s numerous dining options, browse locally made items in the shops, or learn about the area’s history at the Telluride Historical Museum, where you can immerse yourself in the story of the gold rush, or see their collection of artifacts from the local Ute heritage.

Whether your goal is to scale an ice wall or sink into an outdoor hot tub with a cocktail in hand, Telluride is the perfect destination. DT