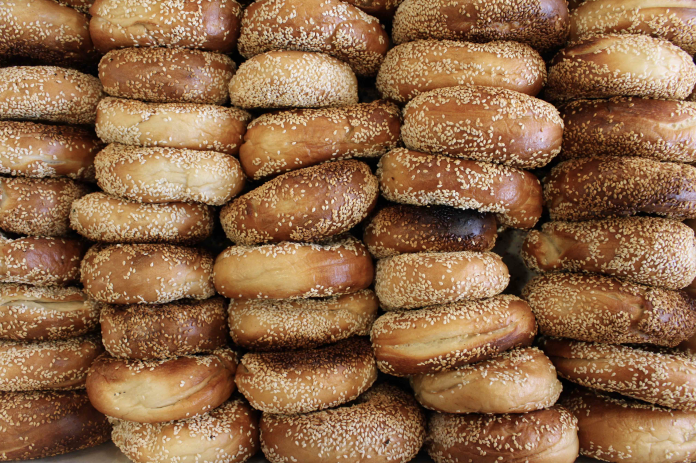 New Yorkers love their bagels, and Black Seed is one of the hottest bagel joints to join the market in the last five years. Since their opening in 2014, James Beard-nominated head baker Dianna Daoheung has been making a unique bagel that combines New York and Montreal styles. We talked with Dianna about Black Seed’s personal style, how they stand out in New York’s competitive bagel market, and their beloved monthly chef collaborations.

Downtown: In such a bagel saturated city, how did you decide to start Black Seed?

Dianna Daoheung: Five years ago, Matt Kliegman and Noah Bernamoff (Black Seed’s owners) were having beers and discussing the sad of a state the bagel world. They decided to do something about it by opening up a shop. That’s when they brought me in to create the perfect hybrid bagel that uses both NYC and Montreal techniques and traditions.

Downtown: How do you categorize your bagels or why can’t they be categorized?

DD: We like to say they are a perfect hybrid of a Montreal and NYC bagel. The dough is very NYC, but the cooking methods (using wood-fired oven and boiling in a honey-water solution before baking) are very much Montreal.

Downtown: How did you develop the recipe?

DD: I did a lot of tasting, traveling, experimenting, and trailing at some amazing shops.

Downtown: Is anyone else doing something similar to your NYC/Montreal hybrid bagels?

DD: There was a shop about six years ago but they shut down. I wouldn’t be surprised if there was, but not that I know of.

Downtown: Did you expect to gain such a cult following?

DD: I 100% did not expect a cult following. I am still so flattered by the devotion people have for our bagels. Seeing people willing to stand in line for something you created is such an amazing feeling.

Downtown: How did the chef collaborations come to be?

DD: This all started when I noticed chefs coming in daily before their restaurant shifts. As the chefs and I would talk “shop,” they would often comment on their dream bagel, so for fun we started created weekly specials based on their creations. We have now expanded it to monthlong.

Downtown: What has been one of your favorite specials?

DD: Oh man, that’s like asking which kid is your favorite! There honestly have been so many. But I guess if I have to pick, I would say the Baogel (a Chinese pork bun, where we used bagel dough to create the outside). It created a lot of buzz and was a product that I grew up with.

Downtown: How do you choose who to collaborate with?

DD: We choose chefs that have a similar ethos in business as we do and whose foods truly inspire us. Luckily the industry is very tightly knit so we all have six degrees of separation to connect us.

Downtown: What is the development process like for a collaboration?

DD: I give certain guidelines to the chefs (this is important due to kitchen equipment we have in the shops). They then shoot me back some ideas, and I will let them know what works and what does not. I will then start to experiment based on their ideas and then take the samples to them. From there, we photograph it and then announce it to the world!

Be sure to check out this month’s collaboration with Violet, the new Rhode Island style pizza spot from the Pizza Loves Emily group. The special sandwich is made with chorizo, fried egg, melted provolone cheese, and grilled and sautéed kale then topped with sliced banana peppers and served on an everything bagel.