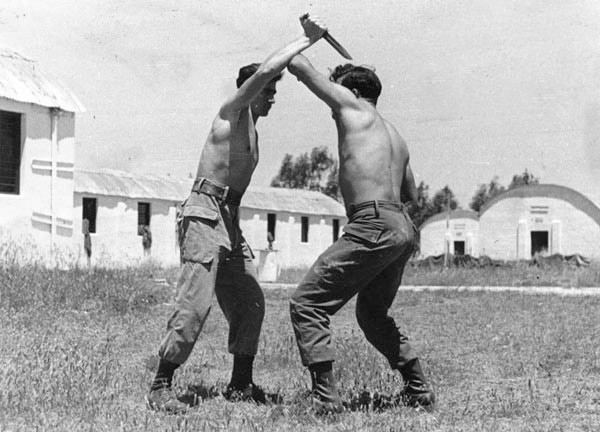 Many A-list celebrities such as Tom Cruise, Ashton Kutcher, Jason Statham, and Daniel Craig have embraced the hip, fighting-style workout known as Krav Maga. This martial art combines kickboxing, street fighting, wresting and karate, and is extremely effective as a fitness routine. In reality, Krav Maga is no joke, and you can do some real damage if you were put into a situation where you needed to protect yourself from a would-be attackers. However, it has helped get tons of the A-lister’s into superior shape and you to can join the fun.

What exactly is Krav Maga? Long before Krav Maga was being known as the go-to-kick-your-body-into-gear fitness choice in Hollywood, it was fine-tuned by an Israeli-Hungarian named Imi Lichtenfeld. Lichtenfeid was living in Bratislava, Slovakia, using his skills as a boxing and wrestling champion. Then soon he realized the styles he was developing could be used to protect Jewish neighborhoods from anti-Semitic thugs in the 1930’s. At this point in time he realized that competition fighting methods like boxing did not work well against street fighting.

So Lichtenfeld combined several disciplines such as Eastern European street fighting, wrestling, boxing, knife fighting, and defense against knife attacks; this would form the foundation of Krav Maga. Lichtenfeld spent much of the 40’s, 50’s and 60’s instructing various military groups on how to use the martial art he had developed. It is the official self-defence method used by the Israeli Defense forces, and US law enforcement agents are also taught techniques derived from this system.

By the 1980’s, other countries such as the United States began showing interest in Krav Maga. In the past 2 decades other martial arts have been added to make it a more complete form of self-defense. Besides what Lichtenfeld originally brought to the table, this fighting method also includes aikido, ju-jitsu, judo, karate, kung-fu, military combat and Muay Thai. It is a noncompetitive martial art that puts an emphasis on real-world situations where efficient and brutal attacks are used.

If the fact that movie stars are getting ripped from the practice doesn’t convince you, perhaps you’ll be more impressed by the results it offers for your own body. Of course, the top reason to do Krav Maga will always be that it strengthens both your fighting skills and mind. This workout can help you put on more muscle mass and reduce body fat at all levels; you will notice a positive change in three to six – 12 weeks.

When I went to my first Krav Maga workout it was nothing like the typical Pilate’s and yoga classes I normally take, or teach. I didn’t quite know what to expect, and of course I was a bit nervous. A typical session begins with stretching exercises, followed by a cardiovascular warm-up. The core part of a class consists of different ‘combatives’ (where particular strikes are learned and perfected) and ‘defenses’ (designed to stop an assailant from injuring, kidnapping, robbing or assaulting you). Also popular at Krav Maga classes, are drills performed on a tombstone pad (punching, elbowing, using the knees) for intense 45- or 60-second bursts. For a stomach as ripped as Hillary Swank’s or abs as tight as Tom Cruise, you’ll need to support your KM workout with a diet bearing the right balance of protein, carbs, essential fats, vitamins and minerals. Fitness experts always highlight the importance of protein when it comes to building muscle, but without a sufficient intake of carbohydrates, you’ll be not have enough energy to complete challenging resistance and weights-based exercises, which should complement your KM classes. The key to proper carb intake is to find the right sources; stay away from processed foods and of course all refined sugars and flours.

One of the best benefits about Krav Maga is that it creates a strong sense of meaning and purpose; more than an exercise routine. Even going through one session, I felt that I had learned a set of life-saving skills which may come in handy one day. It doesn’t matter what sex you are or what age, this will help you build confidence in everything you do. Big thanks to my instructor Ross for taking the time to work with me and showing me this great workout.

Looking to Eat Healthier, Tips for Your Journey