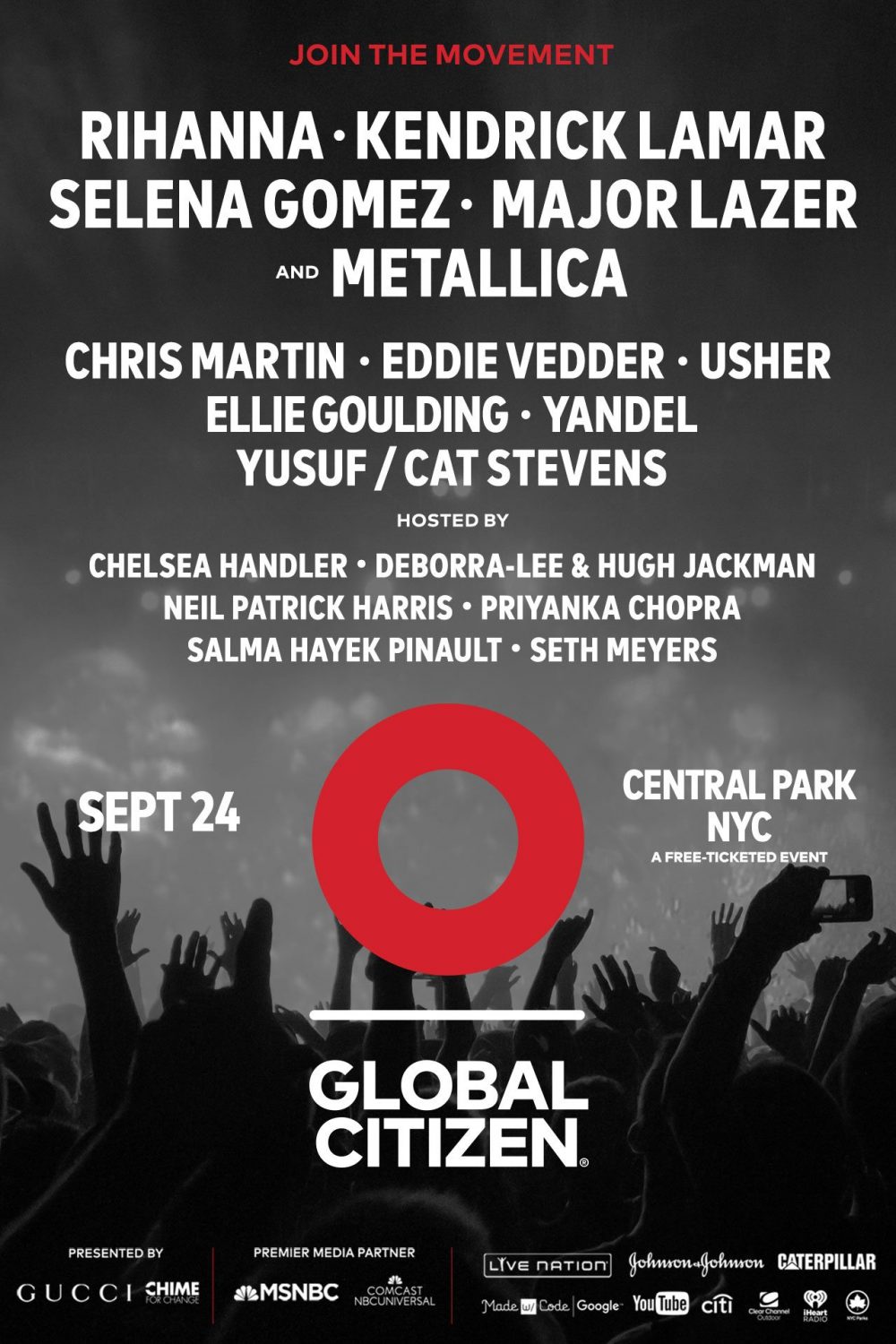 One of the biggest concerts that New York City has to offer, the Global Citizen Festival first launched in 2012. The festival’s first concert event featured the Foo Fighters, The Black Keys, John Legend, Neil Young & Crazy Horse, K’naan, and Band Of Horses, which set the bar very high. In the three years since then, the Global Citizen Music Festival has featured Stevie Wonder, John Mayer, Alicia Keys, Jay-Z, Pearl Jam, and Beyoncé, to name a few superstars. This year’s edition, which takes place on Central Park’s Great Lawn on Sept. 24, has Rihanna, Demi Lovato, Kendrick Lamar, Major Lazer and Metallica as its headliners. Special guests will include Eddie Vedder, Ellie Goulding, Cat Sevens, Selena Gomez, Chelsea Handler, Coldplay’s Chris Martin — who is the current creative director of the event — and Neil Patrick Harris.

In advance of this Saturday’s event, Downtown caught up with the Global Citizen Festival’s Executive Producer, Jeffrey Zarnow. Beyond his Global Citizen duties, Jeffrey is the CEO and founder of Starr Rum, which is celebrating its 12th anniversary next month. Also in October, Starr Rum will be releasing a 7 Year Aged Rum. Jeffrey kindly entertained questions about both Global Citizen and his spirit.

More info on the Global Citizen Festival can be found online at www.globalcitizen.org, while Starr Rum keeps up a website at www.africanrum.com.

How’d you wind up getting involved with the Global Citizen Festival?

Jeffrey Zarnow: Hugh Evans and Ryan Gall — GCF co-founders — approached me way back when they had a vision for putting on the festival. They knew I was friends with the guys from the Foo Fighters and asked me to help get them to sign on as our first headliner. When the Foos agreed, I realized we were at the beginning of what has proven to be a long crazy journey.

Is there an artist you’re most excited to see at the festival?

JZ: I’m looking forward to seeing every artist and so thankful that each of them have generously agreed to perform. She would never remember it, but I will never forget when I first met Rihanna before she exploded. She truly is a rare spirit. Even then, you knew she was destined for greatness! I’m especially excited & grateful that she is headlining this year’s Global Citizen Festival.

How is Starr Rum tied into the festival?

JZ: We were one of the first companies to embrace the African Union’s New Economic Partnerships for African Development — NEPAD — to create fair trade sustainable jobs. The festival is designed to encourage countries, companies, individuals to strive towards achieving the Global Goals to eradicate extreme poverty. By being both an environmentally and socially-responsible company, we are committed in our own small way to trying to make a difference. Plus, of course, we want to serve our delicious, award-winning rum backstage in the VIP tent to our artists, celebrity hosts, world leaders, titans of industry, etc.

What else is coming up for Starr Rum?

JZ: We are ecstatic to launch our new 7 Year Oak Aged Rum in November. It’s been a labor of love 10 years in the making. At the last second, before we were even finished with the packaging, we sent a sample in a flask to the New York World Wine & Spirits Competition. We figured, “Why not enter and see what they think?” We were so thrilled that they awarded us the Double Gold Medal. The only downside is we only have 900 six packs for all of our markets this year. There is so much interest from our partners in both the on and off trade that we are going to be sold out as soon as it arrives.

What are some of the bars in Manhattan where Starr Rum can be found?

JZ: New York has so many amazing restaurants its impossible to have only one favorite. There is a favorite for whatever you are in the mood for. Whether its cheap Thai or a Michelin Star prefix, it’s all here. Having said that, I find myself consistently going back to Buddakan time and time again. I’ve probably celebrated more birthdays, both my own and my friends, there than anywhere. Yet it’s the perfect place to grab a casual dinner.

Finally, Jeffrey, any last words for the kids?

JZ: Sparing a few minutes of your time can help change someone halfway around the world’s life forever. It doesn’t take much to make a difference. The more you do, the more you will want to make this world a better place for everyone.