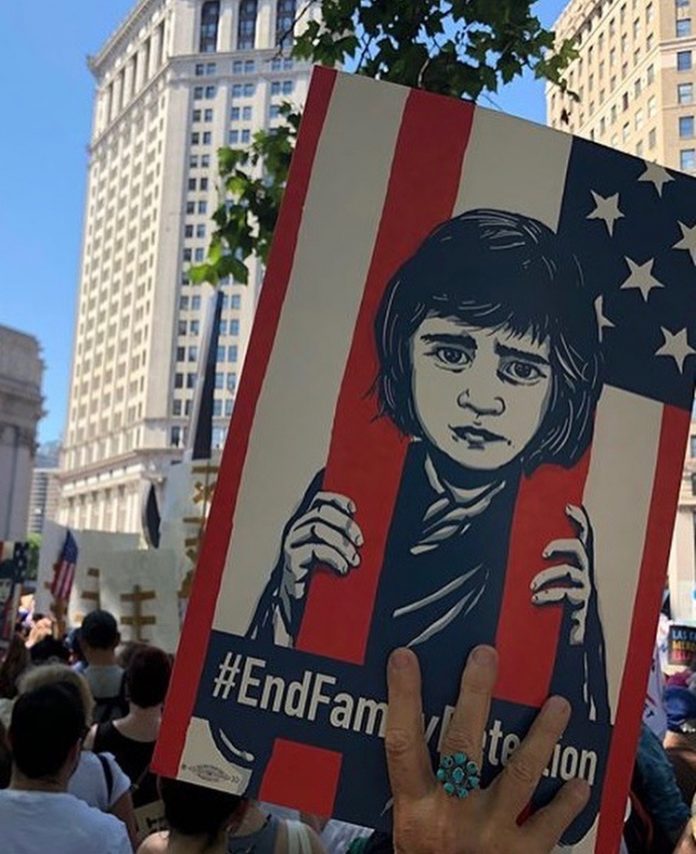 Protesters gathered in Foley Square on Friday afternoon to protest proposed ICE raids targeting thousands of migrants across the country. The crowd began with only 50 people at 5 pm, but ballooned to hundreds by the time the 7 pm vigil began. Shouts of “Defund ICE,” “F*ck Trump,” and “ICE out, families in,” filled the square in between testimonials and calls to action by speakers and organizers. The event was organized by the National Coalition to Close the Concentration Camps and Lights for Liberty.

This protest is part of an ongoing series of protests, part of a “national day of action” on July 12th against an executive branch policy of imprisoning suspected migrants in overcrowded conditions without trial for extended periods of time.

“WE HAVE AN EMERGENCY IN OUR NATION,” reads the event’s Facebook page, Close The Concentration Camps NYC (Foley Square), “the US government has been violating ‘Flores Settlement‘ laws as well as international human rights laws daily against thousands of children and families.”

The policy has drawn criticism from both national and international sources. Dr. Colleen Kraft, president of the American Association of Pediatrics, referred to the imprisonment of children in the camps as “government-sanctioned child abuse.” UN High Commissioner for Human Rights Michelle Bachelet called the camps “undignified and damaging,” adding, “This should never happen anywhere.”