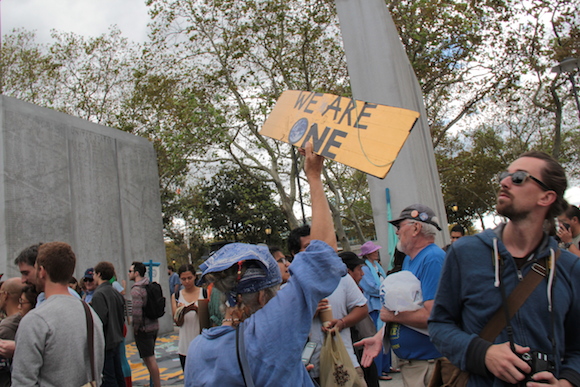 On Monday September 22nd, hundreds of protestors flooded the streets of Wall Street to advocate their goal of improving fair trade and commerce. Inspired by the massively large Climate March through the streets of New York City just the day before, this smaller group of activists marching for “Flood Wall Street” stormed the streets of Lower Manhattan to promote fair commerce, the equality of fair opportunities and to end the climate crisis.

To add an extra ounce of fight to the previous day’s Climate March, protestors stormed down Broadway in the Financial District, towards the heart of the world’s financial capital. 102 people were arrested or summoned after the “Flood Wall Street” march despite many protestors saying their original goal was to carry out the march peacefully.

DOWNTOWN has always supported the environmental movement and in fact, one prominent figure in the Climate March on Sunday was featured in our Summer 2011 issue. Leonardo DiCaprio appropriately took the place on our cover for our “Green Issue” which covered some of Lower Manhattan’s most eco-friendly businesses, residences and leaders. DiCaprio will be speaking at Tuesday’s UN summit on climate change to raise awareness of the urgency and important benefits of acting immediately to combat climate change in the future.

One protestor told DOWNTOWN, “Tomorrow is the UN gathering on climate change so we are just trying to show them that the environment is very important not only for us, but for the future.”