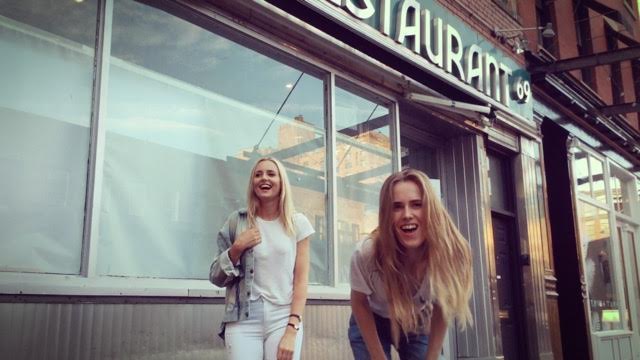 There are certain artists that I know I can depend upon for quality-oriented songwriting and production, and Adam Schlesinger is one of those artists. Beyond co-founding both Ivy and Fountains Of Wayne – and being one-fourth of the short-lived supergroup Tinted Windows – Adam has co-written for a lot of notable TV, film and theatrical projects, including That Thing You Do!, A Colbert Christmas, Sesame Street and the Broadway adaption of Cry-Baby. Ultimately, he’s the rare sort of guy that’s a rocker while also a big award winner; Adam is an Emmy and Grammy winner and a Tony, Oscar and Golden Globe nominee.

So when I heard about Adam producing Anna Nordeen and Reni Lane, a Brooklyn-based duo named Fever High, I was very curious. All Work, Fever High’s debut EP, will be released on October 9th. NPR Music and The Nerdist are among the outlets already praising the group, which features Adam on bass and Brian Wolfe – of Sufjan Stevens and St. Vincent fame – on drums. I’ve heard Fever High being called “one part Bananarama, one part Nu-Shooz,” alluding to their 1980s-friendly sound, and that sounds fairly spot-on to me.

I was able to ask questions to Anna, Reni and Adam about the band, which is rumored to be playing at The Living Room in Brooklyn in October. How would you describe Fever High to someone who hasn’t heard the band before?

Reni Lane: We get in a musical time machine. First stop: Bananarama. Second stop: The Chiffons. All along the way, we dance!

At what point will you know that your band has truly “made it?” Is there a specific accomplishment you’re aiming towards?

A: When I can quit my day job.

R: When I don’t have to visit my parents in Virginia for my yearly teeth cleaning.

How did you wind up working with Adam?

A: We were always sort of in the same scene in New York. I would to come to Adam’s studio to put vocals on demo tracks he’d be writing. One day he asked me to put vocals on a song he was working on called “That’s So Typical.” That’s when we decided to start collaborating, writing and make it a band.

R: A studio buddy of mine from Boston linked me up with Adam earlier this year. Then I met Anna at Adam’s studio and the rest is history. We recorded two songs the first day we met!

Was Adam your link to Brian Wolfe playing on the album?

Where did you record your album?

A: Omelette Station, which is Adam’s studio. [Editor’s Note: For a long time, Adam co-owned a recording studio in the Chelsea area called Stratosphere Sound: https://en.wikipedia.org/wiki/Stratosphere_Sound]

When might we be seeing the band perform live in New York?

A: You will absolutely be seeing us play in October, if not sooner. Working out dates right now. What I can tell you for sure is that our EP, All Work, will be released October 9.

When you’re not working on music-related matters, what do you like to do with yourself?

R: You can find me at Salvation Army looking for mason jars.

Having accomplished so much with Fountains Of Wayne, Ivy and somewhat with Tinted Windows, when the music business was in peak form, what is it that drew you to being part of another band?

Adam Schlesinger: I guess I still like music for some reason! I don’t think I ever was in a band because I thought being in the music business was a good career idea.

Aside from Fever High, what have you been working on as of late?

A: The last couple of months I have been co-writing songs with the comedian Rachel Bloom for a TV show called Crazy Ex Girlfriend.

Will you be the featured pianist for an evening at Sid Gold’s Request Room anytime soon?

A: I hope to get my song list together soon so that I can at least sub occasionally.

One of my favorite songs you’ve written is “Work To Do,” which America recorded. Do you ever see working with another heritage act like you did with America?

A: I love working with anyone that has good songs and a good vibe. How long they’ve been around doesn’t really factor into it.