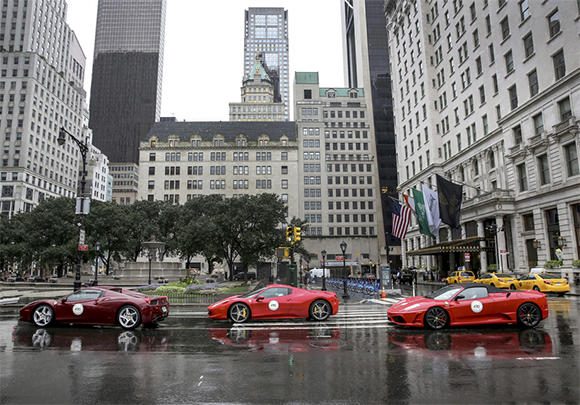 As of 2014, Ferrari vehicles have officially been in the United States for 60 years. In early August, Ferrari hosted a tribute rally based in New York City to celebrate this iconic anniversary.

On Friday night of the rally weekend, Ferrari owners were invited to attend a private evening dinner and cocktail party in downtown Manhattan. After a night out on the town, participants were treated with a nights stay at the Ritz Carlton in Battery Park where the trip to Connecticut would begin the following morning.

Starting at sunrise Saturday, the rally took off from Battery Park. The fleet of Ferraris started their journey passing some of the city’s most notorious monuments including Freedom Tower, The Flatiron building, Central Park and Times Square.

After a lavish start in NYC, the 48 fired-up Ferraris headed to Miller Motorcars, the first Ferrari dealership in the United States still in operation, located in Greenwich Connecticut. Excited Ferrari admirers lined the roadways as vehicles passed through the expanse of Connecticut countryside.

They stopped for a luncheon at a private estate in Connecticut, and then to finish up the journey, the drivers headed East to the Bridge Club in Bridgehampton, New York. The golf club at the final destination is built on the edges of what was once The Bridge Race Track, a track that was frequented by Ferraris in the 1950’s which proved as a beautiful backdrop for the final lineup of cars.

Many models of Ferraris were represented including the 250 GT SWB, 275 GTB, and 365 GTB Daytona, Superamerica, 458 Speciale and California T. Models represented included classic models to the more modern, and Ferrari lovers from all around the East Coast were impressed. The Newest Pop-up Welcomes New Yorkers To Visit and Celebrate