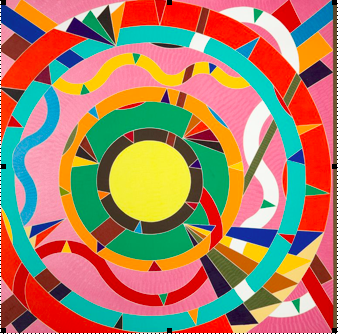 The groundbreaking work of African-American artist William T. Williams, was recently featured at the Michael Rosenfeld Gallery in Chelsea.

“Williams’ work represents a significant contribution to the African-American art landscape and I am proud to say that I possess one of his finest works in my own collection,” said noted New York developer and art collector, Elie Hirschfeld.

For five decades, Williams has been committed to an abstraction driven by productive tensions among colors and forms.

Twenty-eight paintings were featured, including his late-1960s bold geometric abstractions like Harlem Angels (1968) to recent gold metallic fields with lyrical lines like Evidence (2016).

Williams is a highly decorated painter whose awards include a John Simon Guggenheim Fellowship, two National Endowment for the Arts Awards, and a Joan Mitchell Foundation Award.

Elie Hirschfeld’s piece, “Red,” hangs in his personal collection at his East Hampton estate and was bequeathed to him by his mother on her passing in 2006.