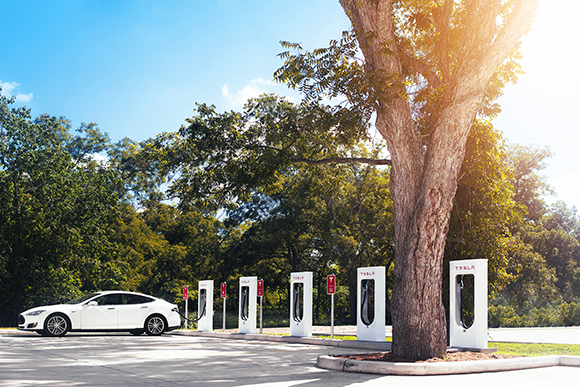 Tesla Model S charging at one of Tesla’s Supercharger stations

With over 15 million cars sold this past year in the US alone, fuel exhaust continues to pollute the air, especially in large cities like New York. Environment New York works to spread the word about pollution and how it not only affects our environment, but also our health, and that these harmful consequences can be erased almost entirely with a simple switch. Last week, on Wednesday, July 2, leaders of Environment New York met with important political and auto industry actors at the Chelsea’s Tesla showroom to talk about how electric cars have the potential to water down the amount of pollution produced each day by gasoline-run cars. Important attendees included Heather Leibowitz, director of Environment New York; State Senator, Brad Holyman; Assembly members Linda  Rosenthal and David Buchwald; regional sales director of ChargePoint Andy Balmuth; and  President of Greater NY Electric Auto Association, Carl Vogel.

“It’s not just because electric cars are speedy, quiet and cool-looking – they are also one of the most important tools we have to break our dependence on oil, clean up our air, improve our health and protect our climate,” says Leibowitz. By using cars like the Tesla Roadster or Model S — two entirely electric vehicles — major cities like New York can reduce pollution dramatically. A shift to electric vehicles can prevent more than 1.7 billion metric tons of pollution annually in New York by 2025. “That’s the equivalent of saving more than 197,817,000 gallons of gasoline per year, or eliminating tailpipe pollution from 370,000 of today’s cars and trucks,” continues Leibowiz.

“With the release of this report, we learn all the more the reasons why it is important to cultivate an electric car industry in New York,” says Buchwald. Manufacturers have also introduced vehicles that run on oil or are charged with coal-fired power, which are healthy for the environment, but electric cars still beat them both. “If we are ever to move away from being dependent on gasoline it would be because electric vehicles are given an opportunity to prove themselves and because infrastructures are put in place to quickly recharge them,” continues Buchwald, and thanks to ChargePoint there are 0ver 18,000 charging stations in the country with hundreds of them in New York. But we still need more charging stations so people don’t have to worry about running low on electricity, and ChargePoint can’t build them alone. Tesla and other motor vehicles like BMW, Toyota, Chevy and Nissan, cannot be the only car companies making electric and/or hybrid cars.

UK motorists might be considering leasing an electric car rather than buying. This is a great way to save money as electric car technology is in constant flux meaning that vehicles become outdated much faster than petrol or diesel. Contact CVS for more information on their monthly offerings and discounts.
With the help of other companies, the world can become a healthier place to live.