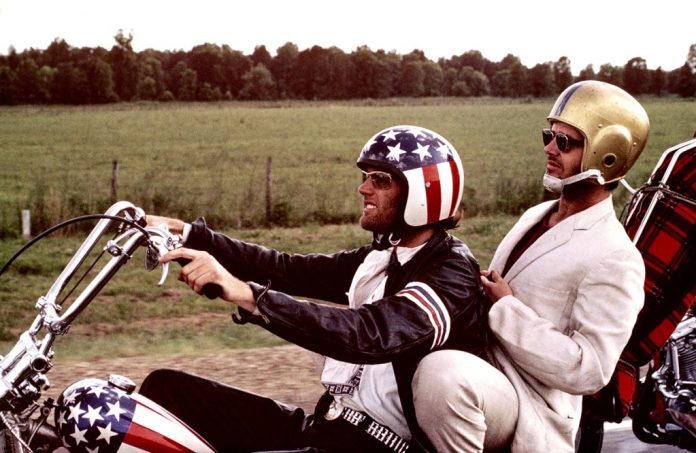 Easy Rider, the iconic film written by Peter Fonda, Dennis Hopper, and Terry Southern, roars into Radio City Music Hall on Friday, September 20th to celebrate its 50th anniversary. The film released in 1969, was one of the very first independent movies and was revolutionary for its time.

Most people know the Easy Rider story but just in case: Wyatt (Fonda) and Billy (Hopper) are hippies who have scored in a big drug deal, and with the cash they earned plan to retire to Florida. But they are taking one last trip from LA to New Orleans to go to Mardi Gras. Along the way they meet up with George Hanson (Jack Nicholson), a square who is tired of small town life. The three set off to “look for America” and as they roll down the highway, they discover that they America they are looking for isn’t actually there. They may not have found America, but Billie and Wyatt rode into the American psyche and the movie remains as relevant today as it was in 1969.

To prove that point, Jason Miller of Live Nation and Peter Shapiro of Dayglo Presents have teamed up to present Easy Rider Live. The evening, originally planned to include opening remarks by Peter Fonda, will celebrate Fonda’s major cinematic achievement with the legendary soundtrack performed live onstage, featuring John Kay of Steppenwolf, Roger McGuinn of The Byrds, along with special guests, and produced by T Bone Burnett. Says Shapiro, “Peter was so excited about doing this for the 50th, I know he will be there with us in spirit. This is the coolest film ever made, and we are so excited to bring it to the audience with live music.” Miller and Shapiro were thrilled to bring this film to such a revered venue as Radio City Music Hall. Says Miller, “They have the world’s largest floating LED screen, so we really couldn’t think of a better place to screen Easy Rider.”

Fonda, sadly, passed away at the age of 79, on August 16, 2019, of respiratory failure due to lung cancer. During the planning of this event he said, “What a ride it’s been! From a funky motel room in Toronto, in ‘67 to a roar on the shore at Cannes, in May 1969. A wild ride up the stairs at the Palais into the history books of cinema. Looking for America. Would we find it today? I think not. Did we really “blow it?” You bet. 50 years later, are we blowing it now? You bet. Enjoy the new print. Sing along with the songs. Laugh with the humor! Remember the spirit! Find the love.” He is survived by his wife, Parky, who says of the event, ““We are all still healing from Peter’s sudden passing, but he would insist that the message of Easy Rider and the culture for which it stands carry on. The celebration of a cinematic masterpiece, a Hollywood icon, and my beloved husband will not only be one of a kind, but exactly what he wanted.”