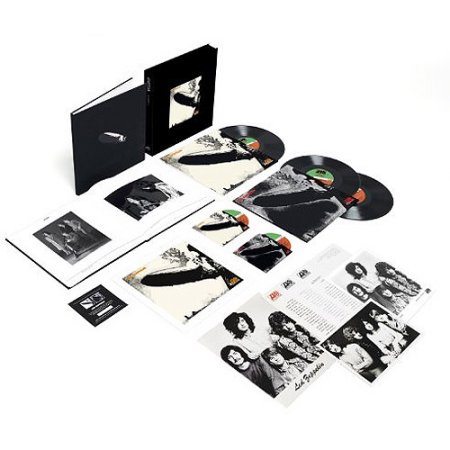 With Black Friday and Cyber Monday just a few days behind us, there is still plenty of time for some gift-planning for this holiday season. Below are 11 deluxe album releases from classic artists for Downtown readers to consider:

1) Phil Collins Take A Look At Me Now: Collector’s Edition

Available in both LP and CD formats, some of Phil Collins’ classic albums have been remastered with new liner notes added in. Phil’s 2010 covers album, Going Back, is in revamped format, now condensed to 14 songs with an alternate tracklisting.

Less than a year after the tragic and sudden loss of David Bowie comes the release of Who Can I Be Now? (1974 – 1976), the second in a series of Bowie box-sets. Available in 12CD, 13LP and digital formats, the collection includes the previously-unreleased 1974 album The Gouster in addition to other previously-unreleased mixes.

Available as both a 3CD and a 5LP set, The Complete BBC Sessions captures Led Zeppelin in its best form — live, that is — between the years of 1969 and 1971. An expansion of the original BBC Sessions release from nearly 20 years ago, this collection includes eight previously-unreleased recordings, in addition to extensive liner notes from Dave Lewis.

The Elektra Years includes all six Elektra-released studio albums released by The Cars. This collection was digitally-remastered by The Cars’ principal songwriter Ric Ocasek while its artwork was overseen by drummer David Robinson. Arguably the most underrated classic rock band of all time.

Toto is largely known in the States for its ballads, as opposed to being known internationally as one of the most accomplished musical collectives ever to reach pop radio; its members have played on thousands of albums. At this Montreux Jazz Festival performance from 1991 — the set includes a CD and DVD with the same setlist — the group mixes up a few hits with some Sly Stone and Jimi Hendrix covers.

This release is an interesting compilation of several Peter Gabriel releases, making for a mix of live performances from 1988, 2002 and 2004, in addition to a documentary. Two DVDs that guarantee you learn a lot about the former frontman of Genesis, who is still playing on some of the world’s biggest stages.

The Scorpions have literally been at it for 51 years, and this DVD — a live performance from a few years back — still shows the German hard rock legends in fine form. The Scorps play all the hits in their hometown with plenty of pyro and on-stage excitement surrounding them.

Micky Dolenz is still associated with The Monkees, having been a major part of 2016’s #1 album Good Times!. But Micky has recorded consistently over the years, even when The Monkees were not active, and The MGM Singles Collection is great proof of that. This single CD collection includes lesser-heard collaborations with Harry Nilsson, Randy Newman, Peter Tork and Starship’s Michael Lloyd.

Bryan Adams has sold close to 100 million records and singles worldwide, and this 1996 concert — a single DVD with a booklet — shows why. In front of a capacity crowd at London’s Wembley Stadium, Bryan Adams plays hit after hit, leaving me to wonder why he isn’t one of the staple artists on classic rock radio. As an aside, his Jeff Lynne-produced 2015 album Get Up is fantastic.

Recorded as part of KISS’ 2014 residency at the Hard Rock Hotel, Rocks Vegas is a concert DVD with an accompanying CD; the DVD includes a seven-song acoustic set not featured on the CD. Selections from all eras of the KISS catalog are featured, makeup and not.

The Independent Years: 1983-2004 is fairly-explanatory by its name, featuring four Social Distortion albums in vinyl form: Mommy’s Little Monster, Prison Bound, Sex, Love & Rock ‘n’ Roll, and the early years compilation Mainliner (Wreckage From The Past). Each of the four LPs is colored differently, with Social D’s 2004 album looking beautiful in gold translucent vinyl. The punk godfathers are still at it, of course, now in their fourth decade.