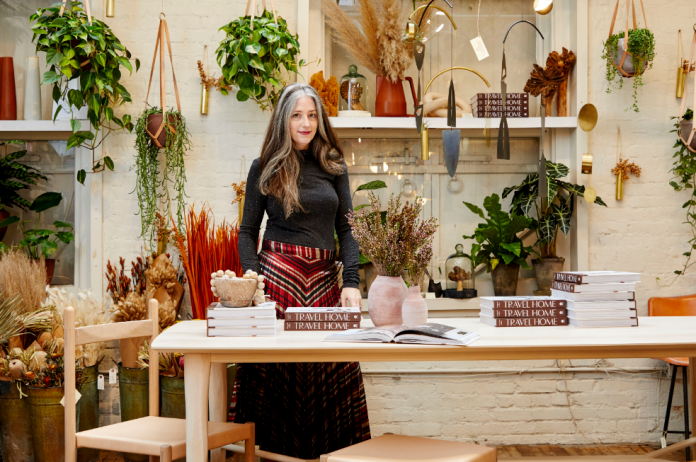 BEFORE SOHO BECAME ONE OF THE PRICIEST –

retail and residential neighborhoods in New York, the large, cast-iron buildings housed factories on the top floors that were used for light manufacturing of household items, lighting, textiles, and fashion accessories. Those goods were then sold in the ground floor retail spaces.

In the 1960’s manufacturing started to give way to artists, who moved into the gigantic lofts because of the tremendous light, and the minimal rents. Though much of SoHo is now more reminiscent of a large, open-air mall, there are still pockets on the outer edges that recall those early days. It is in one of those pockets that Michele Varian has her eponymous design shop.

“I started my business from my loft in SoHo,” says Varian. “I worked as a fashion designer so I wanted to do something that I could self-finance.” Since Varian had fashion experience she had an understanding of textiles and she started with a business that was primarily wholesale. “I started doing these installation-type pieces. I was helping a friend who was getting married in their loft so I made massive cutout scrims that looked like trees and enormous mobiles with transparent and frosted plexiglass discs that reflected the light. I sold those in my first store, but I was mainly doing wholesale business.” Then after September 11, she decided to buck the current trend and open a retail store on “sleepy Crosby Street.”

“I was one of the first retailers on Crosby Street.

I made all of the pillows in the back of the shop, and I hired all of the seamstresses I had worked with in fashion.” Though she had a shop, Varian was mostly still selling her merchandise wholesale to stores like Barney’s, Nieman Marcus, and ABC Carpet & Home. Then the 2008 recession happened and things changed. “My showroom reps in Texas were doing tremendous business for me, and in the beginning of 2008 they abruptly shuttered. They had started to feel the pain from the recession before it happened here.”

In the meantime, ABC asked her to do a pop-up shop, and they placed her in a great location on the ground floor. “Up until 2008, wholesale carried the business, and I was a neighborhood store with regulars, a place where people stopped in to take a break. After 2008, my retail business took off, primarily because I have always had accessible as well as aspirational design. I never wanted to be one of those snobby SoHo shops where the staff glares at customers who don’t have enough money. We always had a neighborhood kind of vibe here.”

Michele Varian in her Howard Street shop (Above). Below, leather-clad mirrors and tableware by DBO Home, in front of wallpaper designed by Varian and printed by Chambord in Hoboken New Jersey.

Today, Varian’s Howard Street shop features an extensive, and colorful pillow library in the basement. She also manufactures her own lighting line in the shop and has a line of wallpaper that she designs, which is manufactured in Hoboken, New Jersey. She just started working with Two Trees in Brooklyn to create a furniture line, and designs jewelry and objets d’art, as well.

The shop also holds a beautifully curated selection of items from other artisanal makers like Bloomist, and DBO Home, which is arranged through Guesst, a system of “pop shares” that she created with fellow Detroit native Jay Norris. The system allows existing retailers and small, artisanal brands to connect. “Even doing a pop-up can be wildly expensive for a small brand.

We are hoping that Guesst will help brick-and-mortar stores to survive and still evolve with the changing times.” DT

Editor’s Note: Michele Varian has moved to 400 Atlantic Avenue, Brooklyn, NY 11217. At the present time, the physical store is closed due to COVID-19, however online ordering is available.