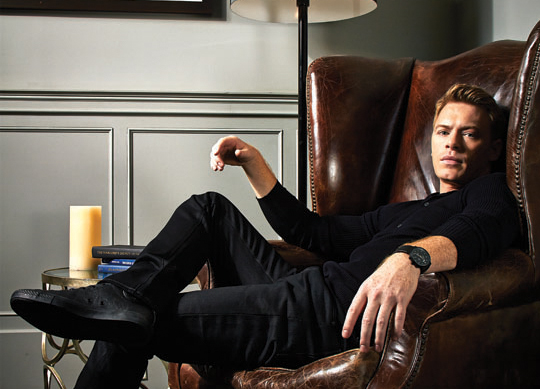 For a farm kid from Nova Scotia, becoming a big name on one of the hottest shows on American TV is an incredible long shot, but on two?

“I know… it’s crazy,” says one of Canada’s most popular imports since hockey, Diego Klattenhoff. The now happily transplanted New Yorker has become a ubiquitous face in American pop culture with starring roles on two of the biggest shows in the last five years Homeland and The Blacklist.

When Homeland held the entire country hostage in its first two seasons, Klattenhoff had the key role as the best buddy of fellow U.S. Marine, former prisoner of war, eventual U.S. congressman and maybe al-Qaeda terrorist, Nicholas Brody. On The Blacklist, he can be seen as by-the-book FBI agent, Donald Ressler, shadowing a super-bad guy who maybe turned good.

In both cases, there is no maybe about it— the shows are a smash.

“It’s not lost on me how special it is to go from having a prominent part in an awardwinning show and then being told you won’t be needed in the same capacity,” says the 34-year-old. “You wonder if you’ll find another girl at the party. Then I get offered Blacklist… and suddenly I’m the belle of the ball.”

Albeit one with a particularly masculine edge. On The Blacklist, the former hockey and baseball players a hard-as-nails investigator who’s not thrilled to have to compromise his values to work with James Spader’s super criminal who’s cut a deal with the Feds. In real life, he couldn’t be more thrilled. Diego Klattenhoff is the Talent subject of DOWNTOWN’s Spring 2014 edition. If you would like to see the full editorial featuring the Homeland and Blacklist star, you can find it in our latest issue on newsstands now!