I should be dancing … If you are like me, when you see dance on TV, Broadway or hear music with just the right beat, your body and brain simultaneously start to move, you cannot sit still. If in fact, this is you then you will understand dance passion and the way that we feel about the new documentary which made its debut at the Tribeca Film Festival, Crime Cutz.

Crime Cutz is a documentary that profiles four New Yorkers to the soundtrack of Holy Ghost!’s Crime Cutz EP. Each subject is invited to interpret a song in their unique style, showcasing these individuals as both subject and collaborator, blurring the line between documentary and music video.

Ben Fries is an award-winning director, producer, and composer from New York City. He has directed more than 20 music videos for bands, including Holy Ghost! and Danny Brown, and has composed music for films such as The Search for General Tso, The City Dark, and The Most Unknown.

Alden Fitzpatrick Nusser is a native Manhattanite who got his start directing short documentaries for news outlets, including the New York Times, the New Yorker, and HBO. He is now developing several projects; among them is a samurai flick set in the tropics and a documentary-opera about a plastic surgery-obsessed grande-dame.

Because of my close ties to the New York Dance community, I thought it would be nice to interview a few of my friends who were featured in the documentary Crime Cutz. In particular the one and only, Lori Brizzi. I met Lori Brizzi about 10 years ago, I’d been living in New York City since 1996. I can say that Lori loves to dance, and she takes care of our entire dance community. Lori works tirelessly to produce the Millennium Dance Parties & Cruises, produces and directs the New York Hustle Congress, and more. Lori is a real New Yorker, graduating from Sewanhaka High School and studying Theatre at New York University. She welcomes all with open arms, teaching and producing these glorious events.

When I first moved to New York, if I slept five days per month in my NYC apartment that would be a lot. I never spent much time in this great city because of my career. This city can be quite lonely if you’ve moved here not knowing a single soul.

I can remember it like it was yesterday, I was chatting with my mom on one of our 6-7 hour phone calls when dancing came into the conversation. Grace why don’t you go dancing, it’s a great place to meet friends, you love to dance? I was like, Mom, Disco is long gone, where would I go?

From the age of 3, I’ve experienced dance passion, taking Tap and Ballet right here in NYC, through the Disco craze in my early 20’s, dance was my life. We lived, ate and drank disco. We worked all day, only to go out that night to dance. I was lucky enough to compete with my dance partner John Pellegrino. Winning was all that we wanted to do. At that time the country was experiencing, Dance Passion.

Like most people in the dance world, there comes a time when a real career and family must come first, it was time to hang up the disco shoes, life was taking over

On that call with my mother many years ago, she suggested that I look up dance studios here in NYC and just go. That night, I actually listened to my mother’s advice and found Stepping Out, I made my way to the studio and danced all night, feeling like I was 20 again.

There are times when I take Lori for granted, but in truth, what Lori Brizzi does for us each and every week is a miracle, she gives us back our youth! 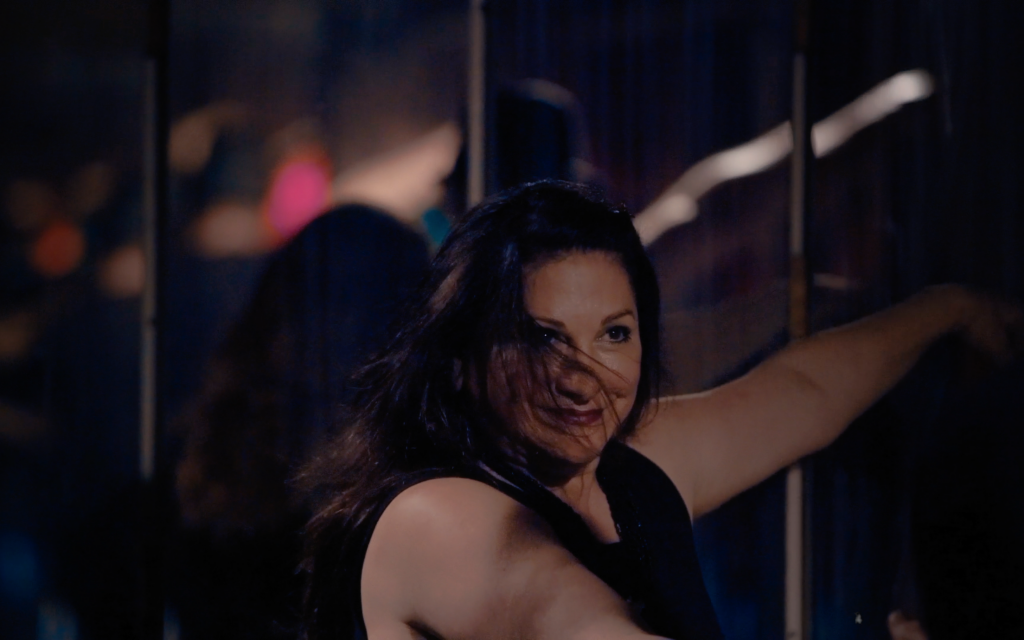 GC What was it like to have this documentary presented at the Tribeca Film Festival?

LB The Crime Cutz Documentary has been an amazing experience. This project started off as a potential music video in the summer of 2016. One of the directors did a google search for hustle dancers and found me, a host and promoter of hustle dances in NYC and a 10-year event director of a 5 day National Hustle dance event called the NY Hustle Congress. He was looking for hustle dancers for a Nu Disco band music video. I had never heard of the genre of music ‘Nu Disco’. I thought it was a new style of music but quickly learned that Nu Disco has been around for some time. I thought this would be fun and good exposure for one of my passions…hustle dancing! I told him I had a lot of young hustle dancers that attend my dances for his music video, but he was clear in his wishes that he wanted to have the original old school hustle dancers. I told him that I have plenty of those people! I advised him that he needed to find a diverse group of dancers if he wanted to truly express the hustle dance scene. I quickly got involved helping to decide which of the band’s songs would be most inspiring for hustle dancing. I helped chose locations, hand picked a diverse group of 10 dancers (5 couples) and also a few ballroom dancers. We started filming in several locations. I never imagined that we would all be standing on the Red Carpet at the Tribeca Film Festival almost 2 years later. What can I say…I was thrilled beyond belief!
GC What do you think this exposure through the documentary will do for the dance world?
LB I am hoping that having a documentary that showcases the uniqueness of hustle dancing on the big screen at the Tribeca Film Festival will be a pathway for a broader audience to experience the artistry, energy, athleticism and sex appeal of hustle dancing, especially from such an eclectic group of dancers. Our dance scene is growing and not just with people from the original days of disco in the 70s and 80s. For many of those people, there is a lot of sentimentality for a time in their life when everything was carefree. It was a time before there was AIDS, the Zika Virus, when the words terrorism and school shootings were not part of our weekly vocabulary, before mortgage payments, college tuitions or elderly caregiving. For these people, it feels like coming home, almost like recapturing a part of their youth. Hopefully, the exposure of the film will let these people know that hustle dancing still is alive and well and they should dust off their boogie shoes and go find a hustle dance party. We have other generations as well as the baby boomers. We have many Gen X and now we have many Millennials learning to hustle dance. So much that I have started a once a month dance called Millennial Hustle. Most of the feedback I received from people that have already seen the film are young people that fell in love with the dance after watching the film. They are really interested to learn it and that makes sense to me. After all, it was a dance that was created by young people for young people in the 70’s and 80’s Why wouldn’t a generation of young people with lots of raging pheromones want to learn it, haha? Hopefully, the film will encourage newcomers to want to learn more about it and fall in love with hustle dancing because it is such a rewarding hobby. As I say in the documentary, “If you’re feeling bad and you come out of a hustle party, I dare you to remember what you were feeling bad about. It’s just really good for the soul”.

GC  Tell me how you personally felt that evening at the festival?

LB I love the documentary, the band: Holy Ghost’s music and how the directors Ben and Alden and the editor’s talent for filmmaking and storytelling made this film into a delightful gem. In today’s world, we have many things that have been dividing us lately but when we are on the dance floor, all of our differences just fade away. Hustle dancing is a great unifier. I have put a lot of my life into reviving, preserving and regenerating hustle dancing over the last 16 years, which is when I started my hustle dance parties, cruises, boat rides and the national hustle events, so this was like a dream come true for me. I’m always trying to find new ways to get the word out there about the joy of hustle dancing so I was very grateful and honored to be a part of it all and while standing on that Red Carpet, I felt like I was beaming. And it was wonderful seeing so many of the dancers expressing themselves so beautifully on the big screen. I was ecstatic!
I asked Mihoko, another dancer and friend in the film to give me her thoughts on the documentary?
“While most associate the dance of hustle with disco music, Sal and I love dancing to many genres, exploring conversations through music and movement. We are probably considered one of the most musicality inclined. We are always excited and inspired to be involved in collaborative projects where artistries of different forms synthesize. It becomes special, as in Crime Cutz, when everyone involved is a New Yorker, creative and eclectic, inclusive and evolving.  Through this music video/documentary, we hope viewers can feel our passion for our dance hustle and the sheer bliss when we feel one with the music.” Mihoko Ninomiya and Sal Rentas
This 17-minute film Crime Cutz is worth every minute. I encourage you to heed Lori’s comments, get out and DANCE! 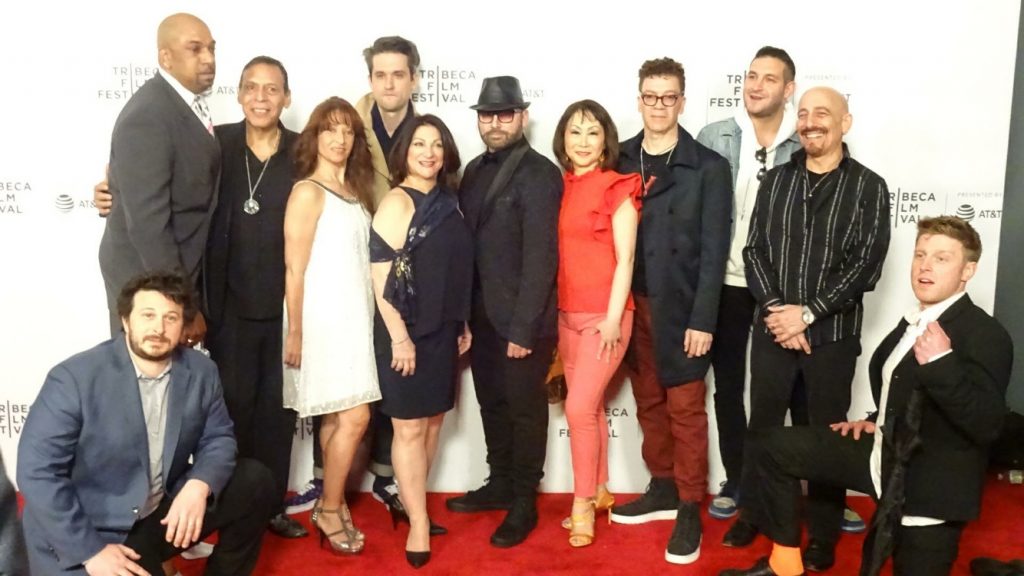 Giving a shout out to some of the dancers from our group who appear in the film Crime Cutz and have Dance Passion.
Tyeweed
Carlitos Vazquez
Heidi Coca
John Rinaldi
Louie Orlando
Mihoko Ninomiya
Sal Rentas
Roberto Valentin

Michael A. Feliciano .. she single-handedly saved our favorite past time… dancing and BROUGHT it back to LIFE… Lori Brizzi you are the greatest person I KNOW… I am glad to know you.
Lori Brizzi thank you for undying devotion to the Dance Community and for always providing a place for us to Dance!!!!!
Carlitos Vazquez  We danced our hearts out making this movie… thank you Lori for letting us be a part of your story. Hope Y’all enjoy!
Lillian Santiago Fantastic!! Well deserved!! Thank you, Lori, for everything you do and fun parties!! Congrats to you!!

Gardening with Kids: A PAUSE Activity