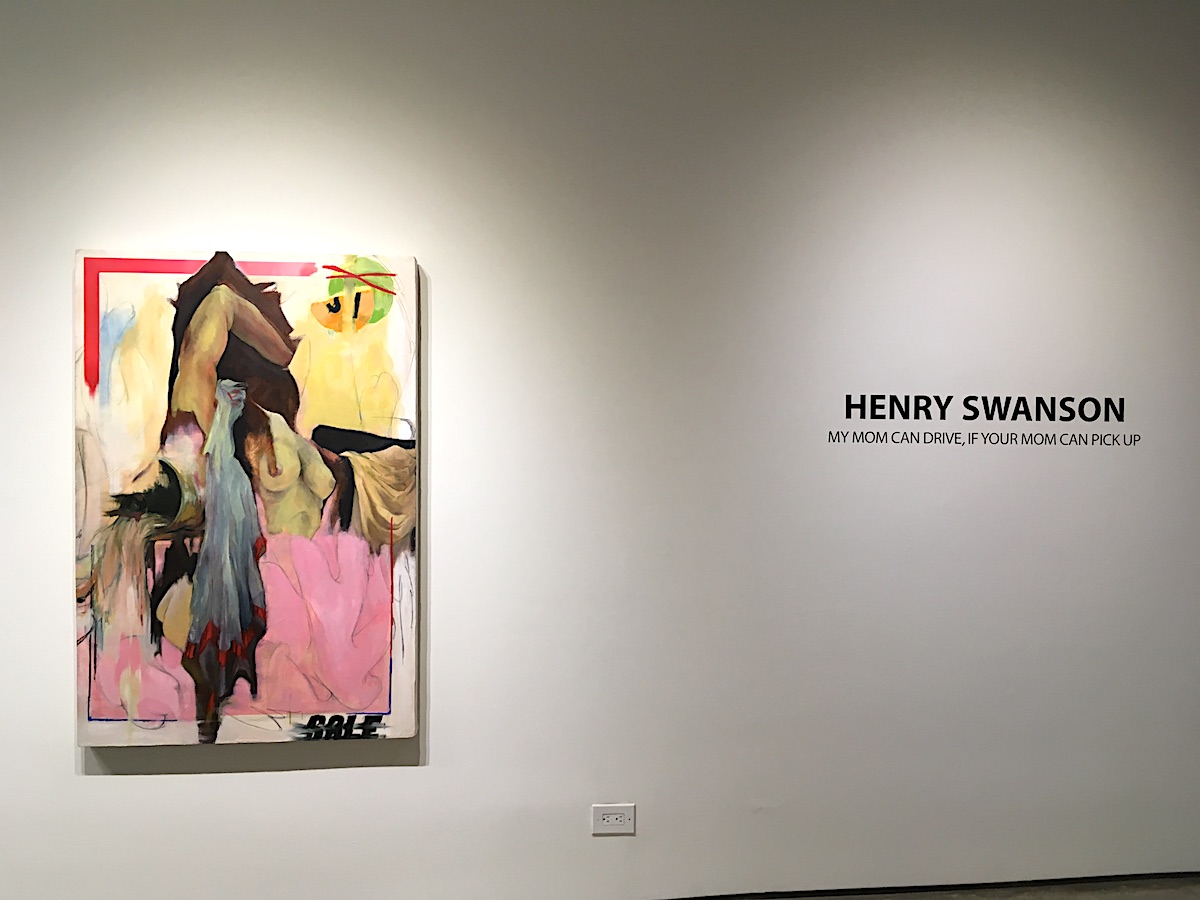 Dallas-based artist Henry Swanson is currently in the middle of his first New York City solo show, My Mom Can Drive, If Your Mom Can Pick Up, which runs through Feb. 10th at the Anna Zorina Gallery at 533 W. 23rd St., next to the Highline.

The 23-year-old Swanson, a graduate of the prestigious Rhode Island School of Design, recently spent 6 weeks as the Artist in Residence at The Goss-Michael Foundation, a major player in the Dallas art scene (run by Kenny Goss, former partner of the late musician and philanthropist George Michael, and Goss’ sister-in-law Joyce). The residency and its resulting exhibition, Mad Festive, gave Swanson his first real taste of life as a working artist.

He describes his new show as “discussing themes of Southern childhood insanity and Dallas’ culture of constant change and revision — politically and physically.” Here he takes Downtown through some pieces from the exhibition, talks about his ever-changing relationship with an ever-changing NYC, remembers his “big break,” and tries to explain just what it is about Dallas that makes its hidden-in-plain-sight dysfunction such a fascinating and bottomless source of artistic inspiration. 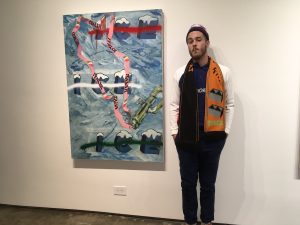 From Dallas, To NYC, To New England And Back: Changing Perspectives

“There’s always been gaps in the times I’ve been here. The first time I was here, I was maybe 15 or 16, so coming from Dallas, I was like ‘This is the greatest place ever!’ And I didn’t know anybody, so it was just awesome. Everything was visually the coolest thing I’d ever seen.

Then I didn’t come back for a while, and my second experience [with New Yorkers] was during college. There was this huge swarm of people who grew up in New Jersey and around New York City, all showing up at this New England art school. It reshapes your view of a city, what you think of it. That was the first time I’d ever met real New York people, and it totally remolded what I thought of the city… I was thinking, ‘I don’t like anyone from this city, and I don’t understand the cultural interaction dynamic.’ Just socially, I thought it was not appealing at all.

Last time I was here, it was about 5 Pointz and street art, and now it’s more like construction site stuff that I find more exciting. Everything in New York is still exciting, but it’s always a whole different culture that I’m being baptized into every day.”

We’re Not So Different After All, Are We?

Yet everything that makes its way into my work comes from negativity, sarcasm, or deflective attitudes. It’s all there. In Dallas, everyone is really nice, all the time. So after being in New England and then returning to Dallas to work for a while, I found I was really annoyed with how nice people were. All of a sudden, people being nice became this really spacey experience of ‘Y’know, I don’t really believe you!’ Spending time with nice people was now really antagonizing. I’m thinking “What are you getting from being so nice right now? This is really frustrating!’ 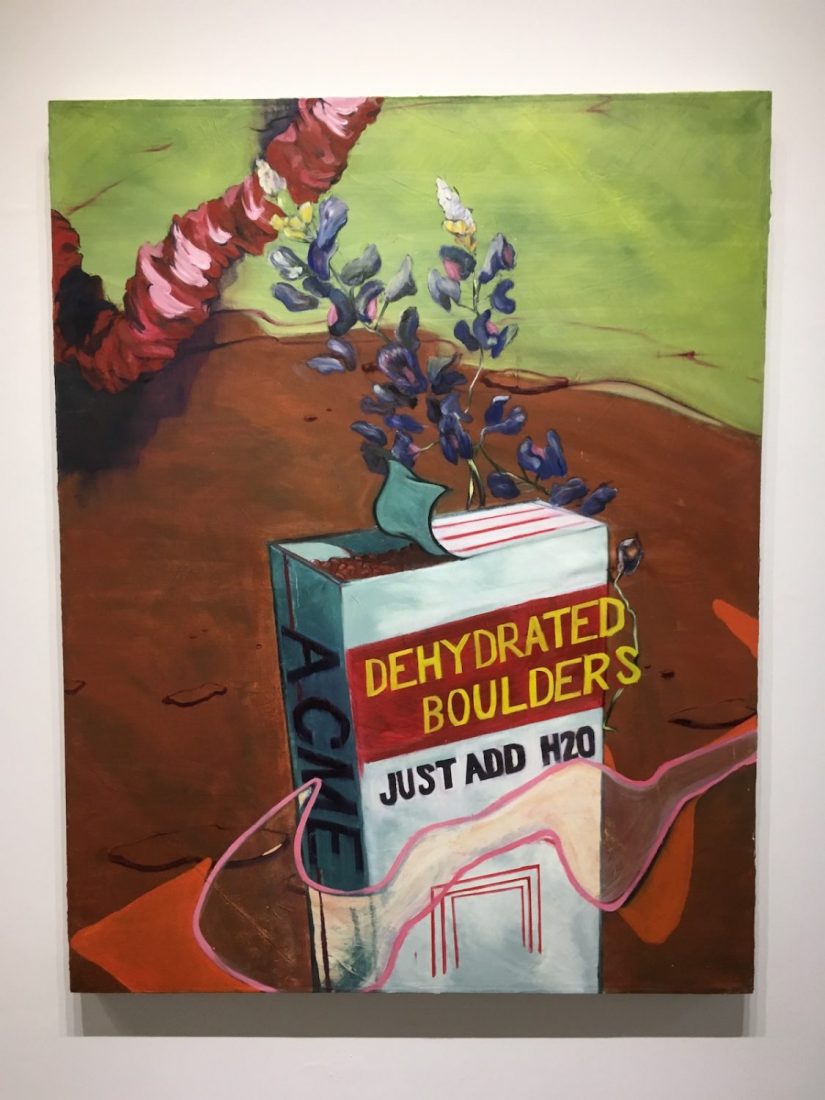 It reached equilibrium at a certain point. There are some things that Dallas and New York have in common, but neither would have admitted that. There are some mutual insecurities and maybe some immature things that might be universal here, but spending time in New York made Dallas a lot campier, and a lot funnier, to me.”

Everybody In The Pool! Um, Except You

“Each piece in the show is a collage/vignette about a couple of different things that represent what my experience of where I’m from is like. Some of it spans way, way back to a memory, while some of it might be something I saw the other day. The compositions are not pre-planned. Sometimes I just see something or someone, and wonder why. The alchemy of Southern pride as a push forward of the stuff that’s already socially strange is like throwing gasoline on a fire. 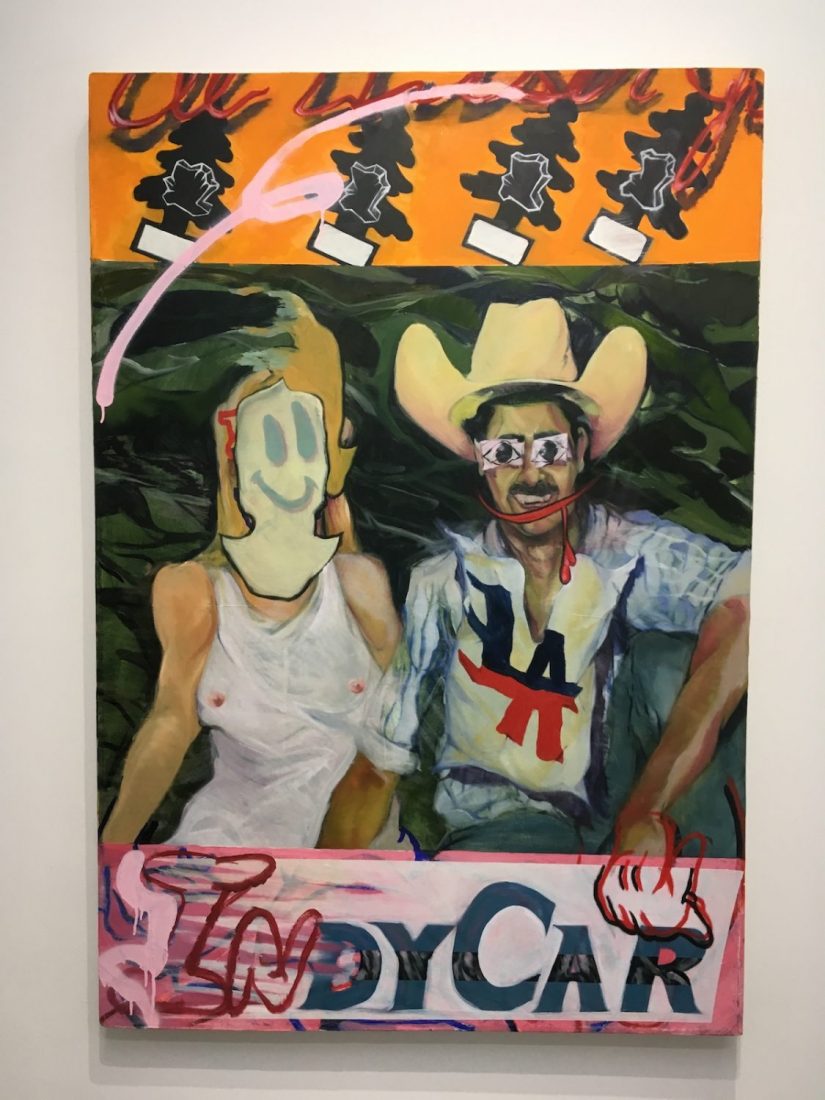 Dallas isn’t like New York City, where different types of people tend to live in different areas. Right next to my house is a country club. And the area around it is this really poor neighborhood. When I was young, the private school kids swam in the pool. The public school kids couldn’t swim in the pool. The whole idea of doing a show about Dallas came to me when I thought about how it’s spliced up in a way where it doesn’t remember any of the crappy things it does to people socially. It just kind of smiles on the front end and puts on a new façade. It’s a beautiful place, but it never owns up to all the negativity of how it treats people.”

Negativity Can Be An Inspiration, So Make It Your Friend

“Some of the pieces are about embracing that negativity, I suppose. It’s like playing tic-tac-toe with yourself. You will beat yourself, but you’ll also see what you should have done. You’re totally in control of how you view that game. 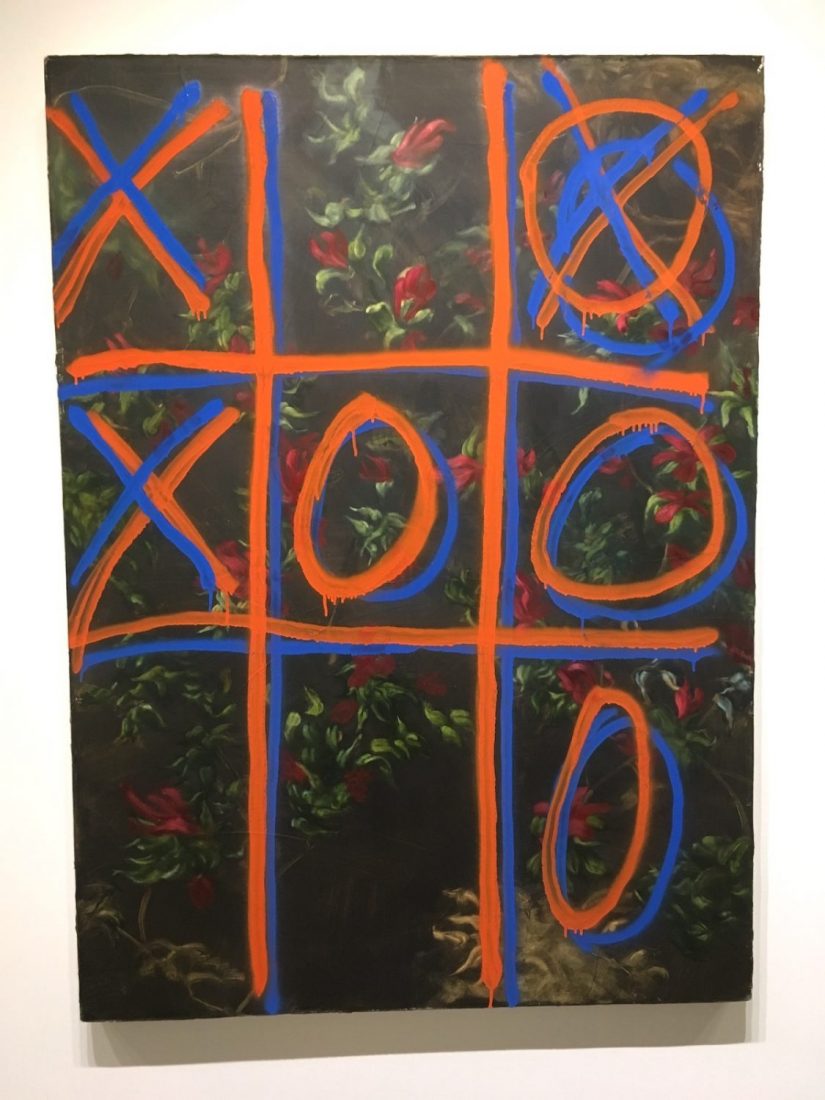 People read some of my work as street art, but the initial intention was to use a construction worker color palette, like the bright orange and blue were intended to be industrial colors. I like pop culture a lot, but I try really hard to make my work not about pop culture. A lot of the art I make is art about art.”

The Call That Changed It All

“I worked in Dallas [after graduating RISD] for a year before I met anyone else who was a painter. I called tons of people, tried to arrange for studio visits, and had no luck because I didn’t know anyone in the Dallas art community. So I didn’t meet any other painters… until my Goss-Michael residency happened.

It happened in less than a day. A friend of a friend saw my work, passed my number on, and the next thing I knew, I got a phone call. It was the first time I’d been asked to make a body of work about one thing. I get a little distracted sometimes and want to do paintings about more than one aesthetic, so I think that show taught me a lot about working through the crisis. It’s a big space, and I had 6 weeks to create the entire show. 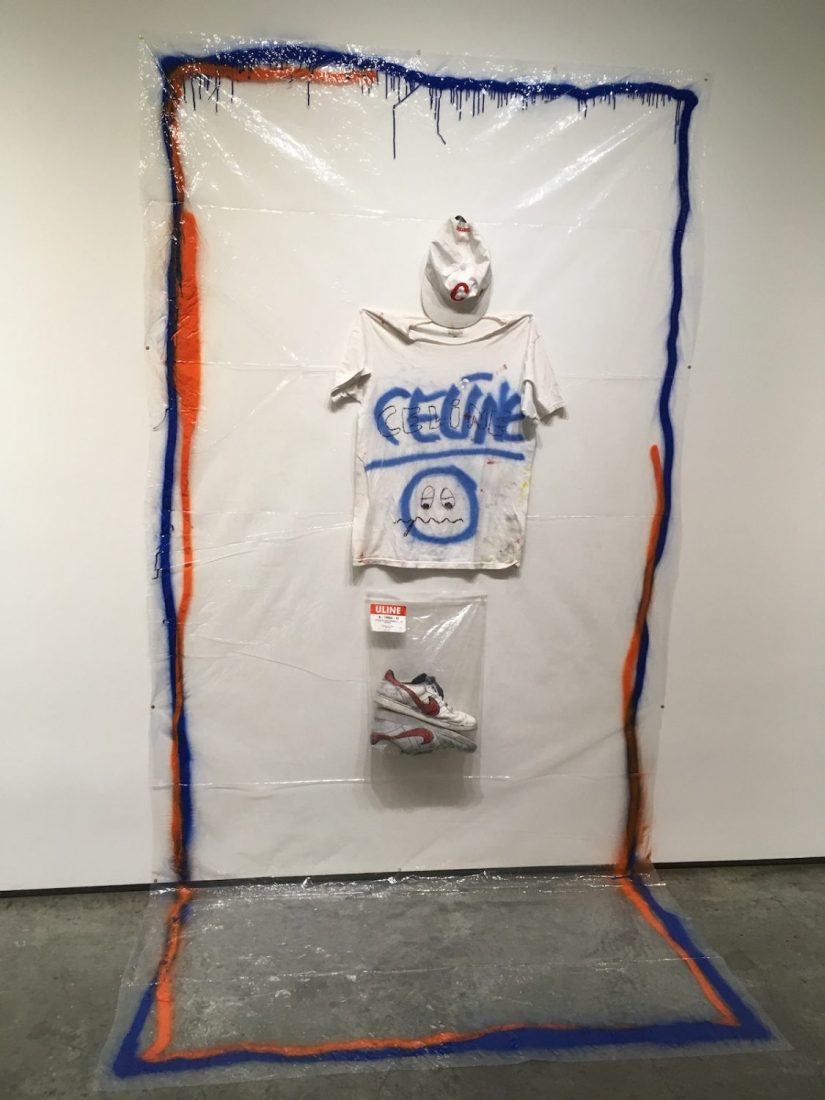 That’s what I wore to my residency every day. That cap, that t-shirt, those shoes. I was doing a lot of paintings on stretched U-Haul tarps at the time. And I was wondering, is it art? Ideally, the spray paint would be on the floor and wall of the space. I’d been looking at a lot of Northern European sculptors who do stuff with lockers and metals and jumper cables … and they’d affix them to become part of the space. That was very exciting to me. It would be a dream to install this piece in that way. In January, I did a whole show of pieces like this. And people still ask me if I do fashion work. I don’t.”

“I Should Totally Do A Texas Thing”

“This is one of the first pieces I did when I was trying to decide what to make the show about. I got it on a road trip to a friend’s college graduation. And I came home and looked it, and thought, ‘I should totally do a Texas thing.’ It fit with a lot of what I wanted to talk about, like family dysfunction in the South being kind of a ‘kicked under the rug’ thing. There’s not a lot to do there, so it’s so out of control. Irresponsible adults running rampant at every level of the socio-economic scale. 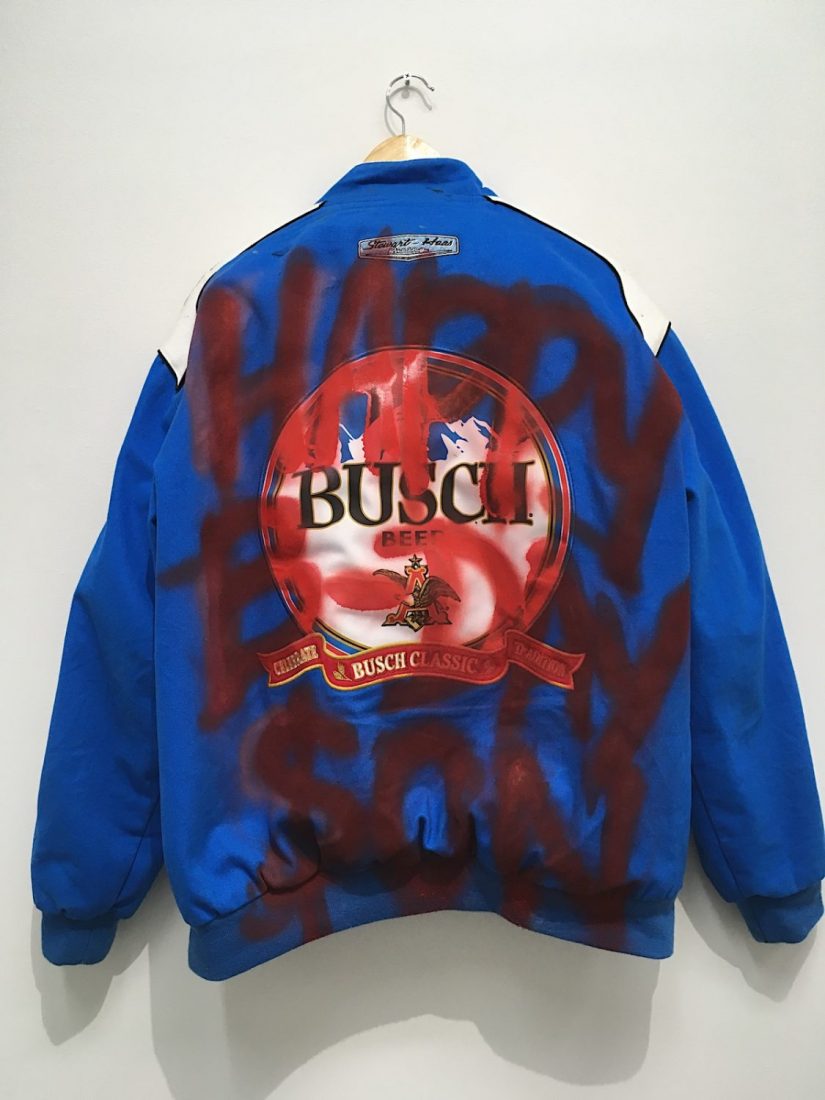 I never for a second want anyone to think I don’t like Dallas or New York. There are things about both that I find hilarious. Like the way rich people can conduct themselves a thousand times worse than poor people. Even if it’s the saddest or most negative thing about Dallas, it should be worth laughing about, saying ‘Isn’t that ridiculous?’”

“My work is about things that make me happy, which is stuff I find funny. Some of it’s dark, but all of it’s funny. I try very hard not to make judgmental paintings. Even if the work is about negativity, I’m never trying to be negative or dark. 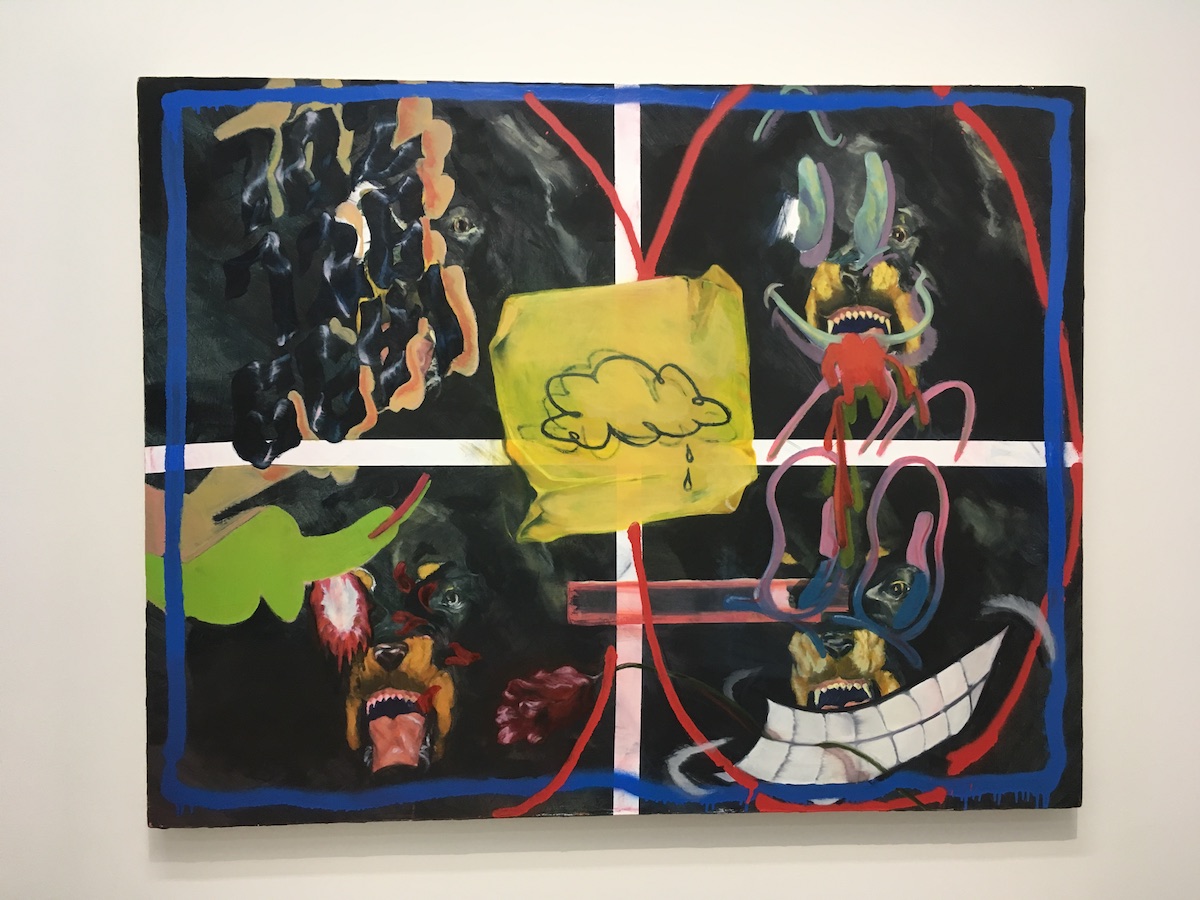 Art is for fun. I find it really hard to spend time with artists who make really critical work. A lot of them think it’s not good work unless it’s hard-hitting and you have some giant thesis about the statement you’re making. What if you just really love to paint? What if you have funny or happy thoughts that maybe address it, but there’s something genuine about it, like ‘We can work with this!’?”

“I bought an I ♥ NY sweatshirt four years ago and wear it everywhere I go. It’s the dirtiest piece of clothing I own. I’ve been to this city a thousand times, but I somehow got lost in Times Square the other day. While, ironically, wearing that touristy shirt. My friend just said ‘Now you have a free pass to act horribly, because everyone expects it from you.’”