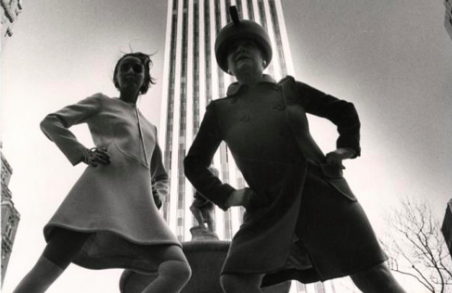 The New York Historical Society is now featuring a fascinating period photo and fashion exhibit by renowned photographer called Bill Cunningham: Facades which will bring you into the heart of the city of another era.

The show features 88 silver gelatin prints that Cunningham shot over a period of eight years, between 1968 and 1976. Cunningham hunted through thrift stores, auctions, and street stalls for period costumes (more than 500) dating back as far as the 1770s, to dress his muse, Editta Sherman in to pose in front of multiple historic New York landmarks (he scouted more than 1,800 locations).

The result is a love letter to the city—which offers an interesting perspective of the period and surroundings of the times. After the photos were published in a book, Facades (1978), Mr. Cunningham donated all of the originals to The New York Historical Society.

Cunningham, who can be credited with contributing to the genesis of street style photography, has been snapping photos of stylish passerby for more than five decades.

He currently has his own column in the New York Times dedicated to this pursuit, and he was profiled in the 2010 documentary, Bill Cunningham New York, directed by Richard Press.

For more information on the exhibit, visit nyhistory.org