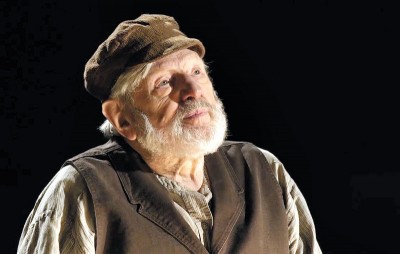 A giant of stage and screen has made his final bow.

Tony and Oscar nominee, Theodore Bikel, passed away on Tuesday morning of natural causes at the UCLA Medical Center in Los Angeles. He was 91-years-old.

DOWNTOWN celebrated the work of the Austrian-born, American hero of the arts last December when his film, Theodore Bikel: In The Shoes of Sholom Aleichem, was showcased by the National Center for Jewish Film in December.

“We mourn the passing but celebrate the life of the incomparable Theodore Bikel, singer, actor, activist, and mensch,” said representatives of the Center in a statement.

“He was one of a kind, a rare combination of Hollywood star, troubadour, humanist, and Yiddishist. He was charismatic, witty, and kind. Theodore Bikel was a beloved icon, and a friend. We will miss him.” Bikel played Fiddler on the Roof’s, Tevye The Milkman, more than 2000 times, in what was probably his most famous role. But he was a towering icon of culture across disciplines.

One of the co-founders of the Israeli Chamber Theatre, Bikel graduated from the London Royal Academy of Dramatic Art and was nominated for an Academy Award for his stirring performance as an American Southern Sheriff in 1958’s The Defiant Ones.

He was also known for the diversity of his roles rom a Scottish police officer to a Russian submarine skipper, Jewish refugee, Dutch sea captain and former Secretary of State Henry Kissinger.

He also sang in 21 languages.

“The world has lost a giant of a man and I have lost someone who is a giant to me, personally, says New York Developer and patron of the arts, Elie Hirschfeld. “He always stayed in my home when he visited New York and we became quite close. He was a special man.”

“In the secular world, doing films with Humphrey Bogart and Lauren Bacall; starring as Cpt. Von Trapp in The Sound of Music; and starting the Newport Folk Festival with Peter Paul & Mary, Pete Seeger and others.

“But he also excels in the world of Yiddishkeit; as Sholom Aleichem; as Tevya; and by making some 20 albums of Israeli music and Yiddish folk music. And Theo always leads in supporting meaningful causes in both the secular and Jewish world.

“The world is a sadder place without him.”