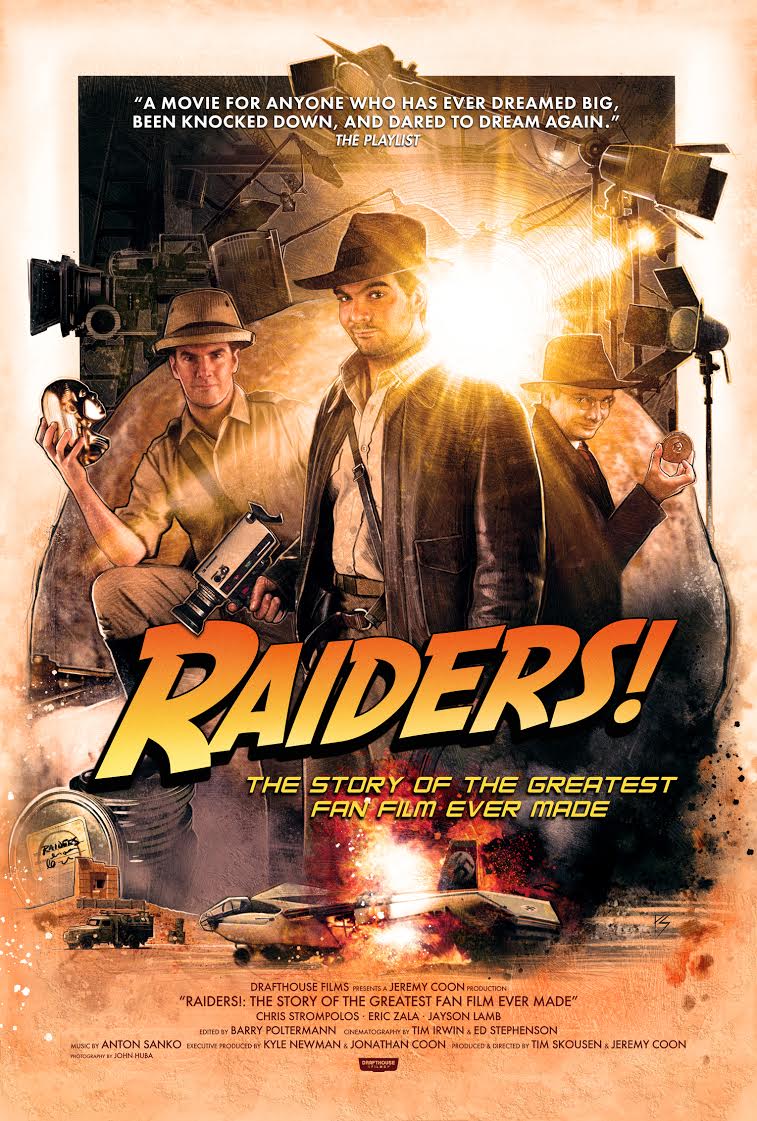 When you were a child, odds are that you reenacted one of your movies with one of your friends. In the case of Chris Strompolos and Eric Zala, they did that but on a much more honorable level. The two recreated the Steven Spielberg film Raiders Of The Lost Ark shot by shot, line by line,and stunt by stunt in the early 1980s, remaking a $20 million classic for around $5,000. Chris and Eric’s remake eventually made the independent film circuit rounds, having been discovered by film industry insiders. The two even wound up meeting with Steven Spielberg himself.

Three decades after the original film’s production started comes Raiders!: The Story Of The Greatest Fan Film Ever Made. A documentary about Chris and Eric’s remake is now out in the world, as made by Tim Skousen and Jeremy Coon and featuring John Rhys Davies and Eli Roth. The Blu-ray/DVD is being distributed by Drafthouse Films — the film distribution arm of Alamo Drafthouse Cinema — and MVD Entertainment.

Chris spoke to Downtown about the original film, the subsequent documentary and what else is coming up for him and Eric. More info on all of this can be found at www.raidersguys.com. In addition, Chris and Eric are both active on Facebook and Twitter.

A lot of people are embarrassed by their creative endeavors from their childhood. At what point did you begin to take pride in this project again?

Chris Strompolos: When it was rediscovered by Eli Roth, Harry Knowles and Tim League and we had our world premiere at the Alamo Drafthouse in Austin, Texas. I was able to see the joy in it again.

Do you have a favorite scene?

And on the opposite end, is there a particular scene that you find hard to watch?

The film took years to make, aside from the airplane scene. When you started working on it, how long did you think it would take to complete?

CS: One summer. A month or two.

Was there a goal when you were making it? That you wanted to show it to other people?

CS: No goal. Did it just for ourselves. For the love of it.

How did Eli Roth first find out about your film?

CS: A beaten VHS tape was passed along through six degrees of separation via the NYU network of film nerds.

Who was the first notable director or actor that you remember commenting on the film?

Has the film ever had an official screening in New York?

CS: Yes. Many. Biggest one being at the Anthology Film Archives and the next, Brooklyn Underground Film Festival.

Steven Spielberg notably reached out to you guys to express appreciation of the film. When you met with him, what was that like? Did you only talk about the film?

CS: We talked about a whole host of things, but yes, mainly Raiders. One of the best days ever. And meeting with him was everything you would want it to be.

CS: It’s my favorite of the Indy franchise, but not my favorite Spielberg movie or movie in general.

In general, did The Adaptation ever lead to you getting more work?

CS: (laughs) No. Say Darren, on that note…can I borrow five bucks? (laughs)

What are you currently working on?

CS: Eric and I have a literary property we are trying to option, there is action adventure script we co-wrote called What The River Takes, an all-musical animated TV series we are developing, and have signed up to produce Tim Skousen’s next film, The Flare.

Finally, Chris, any last words for the kids?

CS: Never let anyone tell you that you can’t do something. Always finish. Don’t take no for an answer. Dreams come in different forms. Be thankful. It’s much harder than you’ll ever be prepared for. Forge ahead. Don’t let fear hold you back. Find a good therapist.

Donald Christiansen, Founder of Chelsea Art Group, Shares his Views on the Evolving World of Art

NYC Mourns The Passing Of Jimmy Webb, “The Angel of Saint Mark’s”