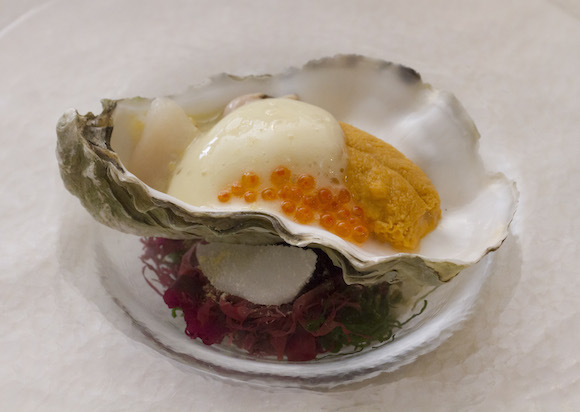 Not that kind of squeeze! We’re talking about yuzu, from Kochi, Japan. Similar to a lemon in looks and texture, yuzu is a fruit prized in Japan for its refreshing yet mild citrus flavor and Chef David Bouley is digging it. This week DOWNTOWN Magazine joined Chefs David Bouley and Isao Yamada of Brushstroke at the Bouley test kitchen in Tribeca for a primer on the fruit: where it comes from and why it’s starting to be one of the most talked about ingredients in the restaurant world.

You may have encountered this delicacy already, especially if you are a fan of Japanese food. Japan is the biggest producer and consumer of the fruit in the world, and half of that comes from the region of Kochi on the southwest island of Shikoku. Now that it’s becoming more readily accessible to restaurateurs in the US, the Japanese fruit is prepping to have its day in the spotlight.

Chef Bouley and Chef Isao Yamada of Brushstroke wowed us, along with New York Times food critic Florence Fabricant, Eater’s Katherine Odell, the Food Network’s Jacob Schiffman, as well as a room full of New York’s most well-known foodies, with dishes such as pacific jumbo oyster with uni, scallop and yuzu foam, Canadian pork belly confit with peach and yuzu ginger sauce and a carpaccio of maine matsutake mushrooms with yuzu-soy veganaise. Did we mention dessert? Yuzu chocolate crème brulèe with yuzu sorbet.

But Chef Bouley wasn’t content to rest on the laurels of his delicious and innovative creations. He was bursting with further uses for the fruit with ceviche as a prime example. While lemon is traditionally used to marinate fish for ceviche, Bouley believes yuzu is an excellent alternative as it’s less harsh and less acidic than lemon and doesn’t “cook” the fish as aggressively as other citrus fruits.

Cocktails were also a discussion point, of course, but they were slightly less indulgent. Bouley also spoke about the health benefits of the fruit and recommended starting the day with a refreshing water and yuzu juice drink – a habit that he swears has allowed him to reduce his morning caffeine intake.