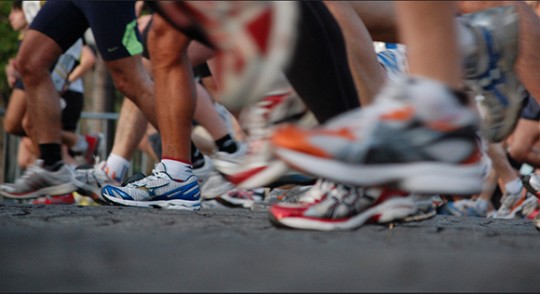 Most runners, whether competitive or recreational, usually don’t know their running cadence. As opposed to running pace, which is how fast you run per mile, running cadence is the number of times your foot lands on the ground in a given minute. Most runners’ cadences are way too slow. The only way to accurately measure cadence is to run with a metronome and time your foot strikes to the beeps. You can download a number of metronomes, even ones specifically for running, from your phone’s app store.

What is an optimal cadence? Generally, recreational runners run in a cadence range of about 156 to 164 foot strikes per minute for both feet, or 78 to 82 per each foot respectively. If you were to film somebody running in this cadence range, his foot would be making contact with the ground for about 7 to 9 film frames, and in about 6 to 6 1/2 frames he would be airborne — this is roughly a 1 to 1.2:1 ratio. This ratio is too long: the longer the foot is on the ground, the higher the chances of the runner landing on something and twisting or rolling the ankle. Also, when there is more force during the landing, the runner increases his chance of landing on his heel, which should be avoided.

Running with a faster cadence will not only decrease the chances of injury, but it will also help with improving the overall biomechanics of your running and eventually increase running speed.

These 5 Mistakes Will Destroy Your CBD Oil Experience