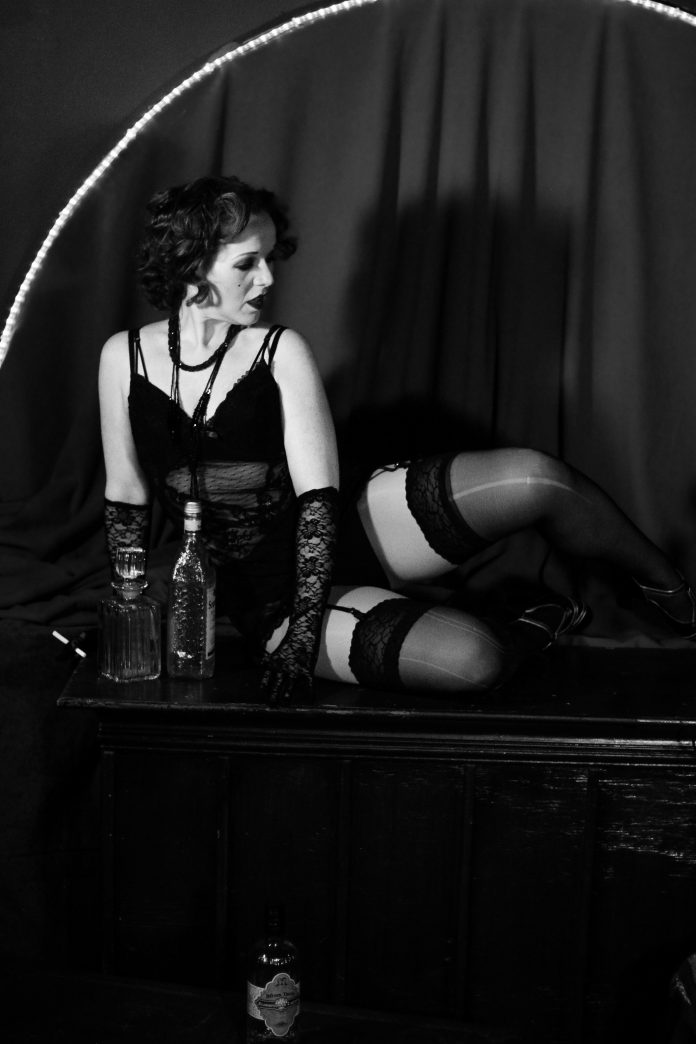 Have you been to the Kit-Kat Club, meine Lieblinge?  It’s appeared in many places over the years; you can find it in Park Slope right now at Gallery Players. Make yourself comfortable cozying up to the stage at intimate candlelit tables. The regal Emcee and a diverse cast of sizzling entertainers will serenade you. Pay no attention to the impending rise of the Third Reich and violence in the streets. In the Kit-Kat Club, life is beautiful.

The Gallery Players’ excellent production of Cabaret takes a strong stance on the already dark classic. Cabaret examines the fall of the Weimar Republic through the eyes of everyman Clifford (Jonas Barranca), an American tourist searching for inspiration and sexual liberation. Cabaret begins with charming glimpses into the seedy bohemian utopia of Berlin: the surprisingly tolerant spinster landlady, the loose neighbor‘s endless queue of amorous sailors; the thriving queer community; the fading squeaks of the Roaring Twenties party horn. As the story progresses, Clifford falls for Sally Bowles (Erica Lustig), a delightful but self-centered English singer with delusions of stardom.

In this production, director David Thomas Cronin focuses on the real villainy of nationalism via the collective. We witness kindly neighbors, family, and friends yield to prejudice and paranoia.  Cabaret delves into homophobia, abortion, and the destruction of democracy.

The lighthearted atmosphere of the first act takes a chilling turn when a swing lowers and a small boy sings the show’s Nationalist anthem, Tomorrow Belongs To Me. The song is revisited as the characters react to the dangerous political climate. The star-crossed romance between Fraülein Schneider (Liz Gurland) and Jewish fruit peddler Herr Schultz (Paul Page) reflects the personal tragedy of xenophobia. Despite Clifford’s growing concerns for their future, Sally blithely refuses to relinquish the bliss of ignorance and privilege.

The enigmatic Emcee, brilliantly played by Brian Levario, dials down the more traditional Greek chorus element and transforms into a ghoulish Pied Piper. The audience, through his interactions, also serves as the cabaret audience, and ultimately a stand-in for passive enablement.

“The role is a great kaleidoscope of the human condition,” says Levario. “The same darkness is creeping into so many of our present national conversations. Our Emcee is not one to see you safely through Berlin, but instead to show you just how through either mass action or inaction, the darkness can win.”

“What we have here is uniquely gritty, audacious, sexy, and…dangerous,” adds Lorinne Lampert, who plays Fraulein Kost,  “David has mined every corner of the script to give roundness and clearer motivation to certain secondary characters.”

This proved to be a provocative artistic choice; many thoughtful questions could be heard in the chatter after the show. Cabaret at the Gallery Players is at once a rueful look at the rise of fascism and a cautionary tale.

Cabaret runs at the Gallery Players until 29 September. It is not to be missed, meine Damen und Herren.