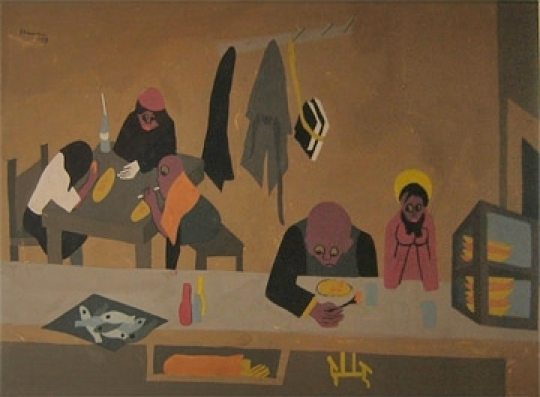 “One Way Ticket: Jacob Lawrence’s Migration Series,” a dazzling collection of the work of the celebrated African American painter, offers a unique entry point on American history at the Museum of Modern Art (MoMa) through September 7!

Lawrence, who’s work is considered seminal for its documentation of the black experience in America, was just 23 years old when he completed a series of 60 small paintings with educational captions about “The Great Migration” of African Americans from the rural South to the Urban North in the early 20th Century in 1941.

Lawrence’s “Migration Series,” offers 60 intimate looks at that period of upheaval in African American life between 1915 and 1970.

The images depict both a harsh and joyful experience in a segregated nation where life couldn’t be more challenging for his people who faced not only The Great Depression with the rest of the nation, but the oppression and discrimination of the Jim Crow Laws that plagued the South.

Within months of its creation, individual pieces of the series entered the collections of The Museum of Modern Art and the Phillips Memorial Gallery (today The Phillips Collection), with each institution acquiring half of the panels.

Lawrence’s work is now an icon in both collections, but THIS collection represents the first time all 60 panels have been reunited in 20 years!

“This is an opportunity for Americans to see the black experience through the eyes of a man who not only documented this tumultuous period of history, but lived it,” says noted art collector and iconic New York developer Elie Hirschfeld who has one of Lawrence’s pieces in his impressive personal collection.

“Harlem Diner holds a special place in my collection as Lawrence is the only African-American artist of the depression era in it,” says Hirschfeld. “His work speaks volumes both about that setting and the people depicted in it. It transports you to a period of time and into a culture in a way that no history book can ever approach.“

Hirschfeld’s piece depicts a sadness and defeat that came with the problems of an era of joblessness and racial oppression – with the kind of artistic clarity that comes with a work by Lawrence.

The hard and brittle aspects of life Harlem are known to have been a tremendous inspiration to Lawrence, who passed away in 2000 at the age of 82. But he was equally as inspired by the vivid colors of the Harlem community.

“Even in my mother’s home,” Lawrence told historian Paul Karlstrom, “people of my mother’s generation would decorate their homes in all sorts of color… so you’d think in terms of Matisse,” he once said.

When Lawrence died on June 9, 2000, the New York Times described him as “One of America’s leading modern figurative painters” and “among the most impassioned visual chroniclers of the African-American experience.”

“I am proud to have one of his pieces in my New York collection,” says Hirschfeld. “His work not only chronicles a defining era of our city and nation…it restores it to life so that it can never be forgotten.”