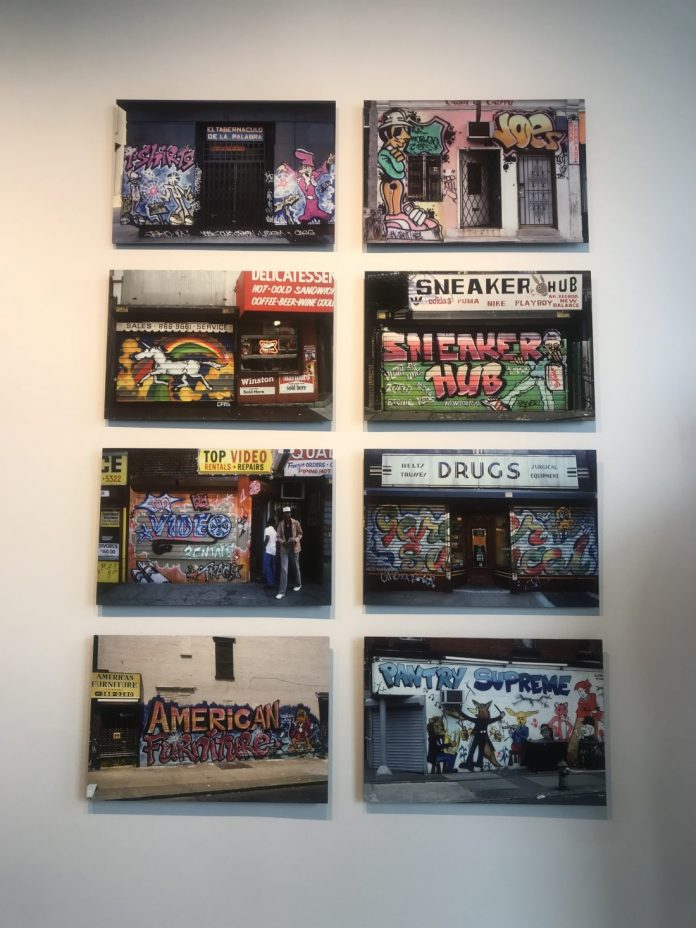 BEYOND THE STREETS has packed its bags from the streets of Los Angeles and traveled to the East Coast to make its debut in one of the art capitals of the world, New York City. Known as the premier exhibition for graffiti, street art, and everything in between, BEYOND THE STREETS decided to take over the city as it’s the epicenter where this art form prevailed. Taking over 100,000 square feet and two floors in the new 25 Kent building in North Williamsburg, the exhibition showcases original artworks, paintings, sculptures, photography, and installations from more than 150 artists from around the world, including the likes of Shepard Fairey, Vhils, Takashi Murakami, MADSAKI, Maya Hayuk, Lady Pink, among others.

DABSMYLA, an Australian husband-and-wife visual artist duo, partnered up with Amelia Posada from Birch and Bone, a floral company in Los Angeles, to do a breathtaking floral installation at BEYOND THE STREET’s exhibit in Los Angeles last year. This year, the couple decided to partner up with Posada to create another floral installation, but this time with a specific theme – unintentionally perfect in time for Pride month.

“We’ve been working on a series of paintings that are a rainbow series like this, with the painting, it’s like gradient, yellow down to blue. And so we wanted to make this installation, something similar to that. First, we collected all the flowers we had, counted them all together, and then worked a mathematical equation on how to add more flowers so that it would make the gradient. We got all the flowers in L.A. prepared and then we were in New York to set up the installation.”

Artists such as MADSAKI and Maya Hayuk talked about their humble beginnings in discovering their connection with art. MADSAKI, a Japanese-American, was born in Japan but moved to the suburbs of New Jersey around the age of six. Upon arriving and growing up, he couldn’t speak much English, partly because he didn’t understand what was happening around him. It wasn’t until he made the connection of drawing as a form of communication.

“I started to pick up the pen or crayon or whatever, and draw anything. If I wanted to tell the kids to look at the airplane, I can’t say airplane. So I drew an airplane. That’s how I really picked up drawing because I never drew before. But when I learned that I can communicate with drawing to people without speaking the language. I was like ‘Oh this is cool, I don’t even have to talk.”

By his mid-twenties and beyond, he’s worked with painting and focusing on working with cartoonish images from his childhood and a combination of words, some containing profanity.

Hayuk, on the other hand, start diving into street art when she was hanging around New York and the SoHo area was just beginning to be built and look promising. She always enjoyed working with large wax oil sticks. “We were painting like weird words and clowns and whatever, so I wouldn’t call it street art. It was more, ‘I’m bored, let’s go painting’,” she said.

However, one thing that Hayuk is very adamant about is refusing to use the term ‘street art’ or putting any descriptive word before ‘art.’

“I mean when you call art, art then it’s art. And you don’t have to put the word street in front of it necessarily. If you look at a group show, it doesn’t say street art on it. It’s just a group of artist names and then you see the association between them.”

One thing that Hayuk pointed out was the differences and dynamics of the actual exhibit. As BEYOND THE STREETS New York promotes itself as a graffiti and street art show, many of the artists don’t fit that particular mold, which is probably why the insert an “and beyond” in the advertising of their brand. She did joke around at the end and inserted that she hates the term ‘urban art’ even more.

There were many other standout pieces at the exhibit, including an honorary Beastie Boys section with archival pieces designed by Cey Adams and small toy-size rail carts repurposed with graffiti plastered on them. An additional bonus to the show was a pop-up shop on the second floor that featured refreshments and merch by many of the artists featured at the show.

BEYOND THE STREETS made its mark on extending the expectations of any art exhibit you’ve ever been to.

For more information and visitation to the exhibit, check out https://beyondthestreets.com/pages/visit to learn more.