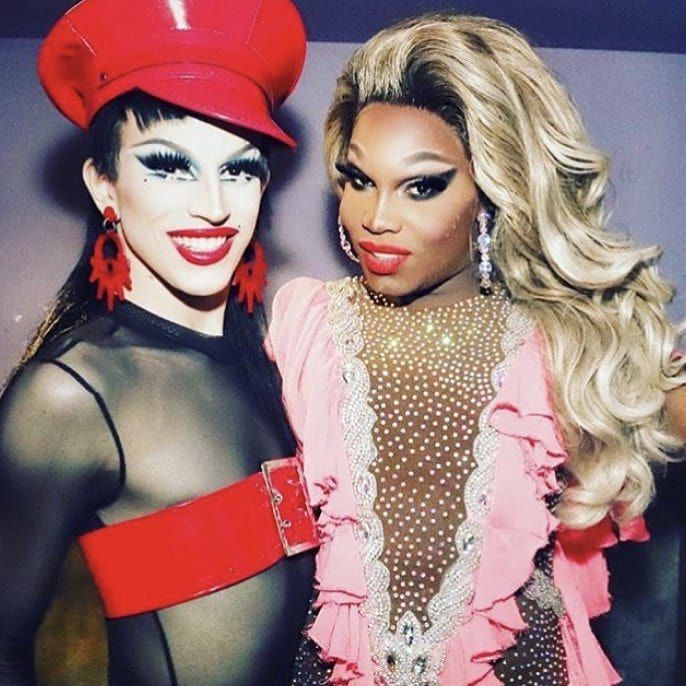 Known to be contestants on RuPaul’s Drag Race Season 10, Aquaria and Asia O’Hara have had their careers skyrocketed with success in landing non-stop gigs and tours, creating music, being the face of makeup and fashion campaigns, and even both of them landing on a spot on New York Magazine this past June. The queens may come from different backgrounds and drag upbringings, but been given the same opportunities to share the spotlight and their art with audiences across the world.

Before the queens got onto the stage and revealed their astonishing looks, Aquaria and Asia O’Hara talked with Downtown Magazine about their relationships with drag and the reality of being a performer behind the main stage.

Downtown Magazine: With this year marking the 50th Anniversary of the Stonewall Uprising and NYC is the host of WorldPride this year, how are you celebrating Pride this year and what does it mean to you specifically?

Aquaria: “I mean, for me, it’s, it’s a lot of work a lot of sharing my creativity, my entertainment, my art with the people that enjoy it and the members of my community that, you know, get inspiration and life from that. So, you know, as a drag queen, I’m very much overbooked right now, but it’s like spreading the love. And I think that’s like my gift that I can give to my community and in trying to entertain and also relay a message of bravery and empowerment. I think that’s kind of what my job is.”

Asia O’Hara: “Yeah. And I think for me, it’s definitely a lot of knowing and making sure I understand my place in the community. I think for a long time, especially for me, pride was just a lot of celebration, and being proud of who you were, and prideful, of course. And now, obviously, being here in New York on the 50th anniversary. It’s like a humbling experience and a reminder to remember my place in the community, and knowing that the things that I do today, or the bricks that I throw today may have a huge impact fifty years from now.”

DT: Being that you’re in NYC and we’re a magazine that focuses primarily on the Downtown scene over here, what is your favorite and least favorite parts of NYC, and what are the fan reactions you get being here than the West Coast?

Asia: “I think for me, I don’t live in New York. I think my favorite part is the fact that you literally can do and be and go anywhere from New York City. I think that that’s one of the things that New York has probably over any other city in the world. I think most cities have their greatness is but the fact that you can be in New York City, and there are an infinite amount of paths that you can take to greatness. I think that’s my favorite thing about the city. My least favorite thing? Of course, today is the traffic like, coming here from Newark. That is my least favorite thing. But I think that’s kind of like the price you pay to be in touch with the iconic place.

DT: How are you constantly evolving in the face of your drag and elevating what your audiences have seen since being on the show; and how will you continue to do so?

Asia: “For me, it’s not about where I want to see my drag, go, it’s more about the velocity of my drag. I want to make sure that it always has velocity and it is always moving. When I started doing drag, most mainstream entertainers made their mark, by knowing who they were and sticking to it and living that their entire career like the Beatles, Michael Jackson. And then there were other entertainers, like, obviously, Madonna, who made her career off of constantly reinventing herself and her career definitely has never been a destination, it’s just always been about the velocity. She’s always one step ahead of the game and going to her next. That’s kind of what I would hope to have in my drag – always have movement and to not be stagnant and always have a sense of philosophy to the next thing, regardless of what it is.”

Aquaria: “I think I can simply agree with that. My favorite part about drag is being able to change day to day and creating different looks and different characters, and a persona in general. That is very inspiring to me. And I think it keeps me on the edge of my seat and my creativity simulated on it. And I think that’s what people enjoy seeing. To stay true to myself by always being different.”

DT: Recently World of Wonder has been releasing a documentary about the Werq the World Tour that you [Aquaria] were apart. Can you talk about your thoughts and feelings while filming your episode and what did you want fans to take from it?

Aquaria: “I filmed my episode over the time span of three or four days after I was done filming the finale for season 10. But I hadn’t known yet if I’ve won, so I was just really stressed out and – not in my head because I thought about such like a contrived ridiculous phrasing – but I was just very to myself and a little closed off, I guess. So you kind of see like a more timid side of me. But on the flip side, you put me and someone like Sharon Needles in the room, or honestly, really any of these girls nowadays. And it’s just like cackle fast. I think, you know, as with anything, you get to see a more authentic side of all the drag queens. Especially when the real side that most people know about us is guessing what objects are under our butt in a mini challenge on Drag Race. It lets people into our minds and in our lives. And everyone is convinced that RuPaul’s Drag Race shows that drag queens are real people but like it’s still theatrical. And this is [Werq the World Documentary] very documentary style, obviously. You get a real sense of who these people are that, you know, turn into the artists on stage that you gag over.”

DT: Going off that, now that we’ve seen Drag Race has lurked into the mainstream, do you see any challenges or assumptions that you face with audiences engaging with drag culture as a whole?

Aquaria: “I think people have a conception that drag always needs to be female presenting, I think people are under the impression that drag needs to be performed by people who are cis-gender men or male presenting. I think people misunderstand the work that goes into it and the heart that goes into creating what we do. You know not many people’s canvas is their self, even if it’s their makeup. Okay, if you don’t like their makeup, that’s one thing. But like, if you’re a drag queen, or a drag entertainer or artist, you know, it’s your heads and toes inside and outside that people are judging. I think people don’t realize that we are giving it our all in every aspect of our being.”

DT: One thing that fans get from viewing you [Asia O’Hara] as a drag artist and an overall person is that you’re very genuine and empathetic in your interactions. How important is it for you to make space and care for others so deeply?

Asia: “I think the space is there. I think everybody has a space. It’s just people, I think it’s a great space that everybody has and everyone’s kind of constantly trying to figure out how to fill that space. I think it’s something that everybody does. And I think that it’s it’s super important. I definitely believe in the exchange of energy and karma. And I believe that the most important thing that you could ever do is second rich the life of someone else. No matter how small or big that is, I think that’s kind of the basis of human interaction. So it’s a space that I think everybody has and I think it’s a large amount of space in everyone. I think a lot of people are wandering through life trying to figure out how to fill this space that they have and that’s how I found that it works for me. And it’s like once you’ve done it once, it’s very habit forming.”

Downtown Magazine wrote up a review on the Looks & Laugh event.