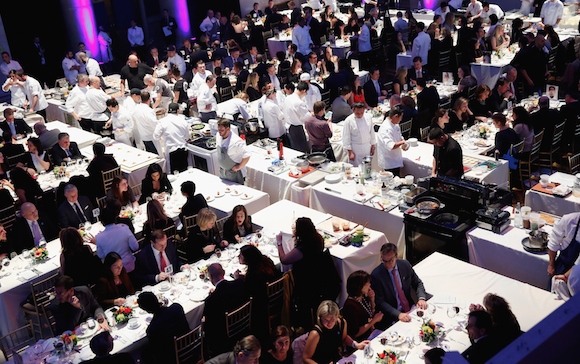 But awareness wasn’t all they raised last night. Between the silent auction, the live auction hosted by culinary MC Billy Harris, and various companies and individuals stepping up to match donations and bids throughout the night, more than $1.3 million was raised for the cause.

It was a powerful and touching evening. Many of the chefs wore Google Glasses throughout the night which not only gave us a bird’s eye view of the cooking, but also reminded us of the amazing and generous collaboration happening between Autism Speaks’ MSSNG Campaign and Google to find answers to why one in 68 children, and one in 42 boys, are currently living with autism.

DOWNTOWN Magazine was lucky enough to sit at The Meatball Shop’s table where chefs Daniel Holzman and Michael Chernow cooked up a feast of poached mortadella and beef meatballs with braised kale, tangerine, fennel and basil salad, roasted apple, chestnut, soap and dessert, but who has room for that after those incredible meatballs?

*Nicola Harrison Ruiz is the Men’s Fashion & Lifestyle Editor at DOWNTOWN Magazine. She is also the founder of Harrison Style – a men’s style consulting business. If you want to take your style up a notch or figure out what to wear at your nest big event, you can find her at http://www.harrison-style.com. Host of the evening, Ted Allen Chef Spike Mendelsohn got to try out Google Glass