“Step aboard the teak decks of our elegant 1920s style yachts, the Manhattan and Manhattan II, and enjoy NYC’s architectural landmarks from the water.” CHL

Downtown Magazine NYC, was thrilled during our StayCation to have enjoyed one of the most informative cruises around New York City. A special branded partnership between Classic Harbor Line and the American Institute of Architects’ (AIA) New York Chapter.
We had the pleasure of inviting several guests, Elizabeth Velez of the Velez Organization, Cesar Astralaga President of Spectra Networks, Alies van den Berg, and Roel Hoekstra both from the Netherlands, working in the finance industry.

During our tour, we met and spoke with Joseph Lengeling, AIA Architecture, and our guide for the day.

1. Tell us a little bit about yourself, how long you’ve been an architect and some of the buildings that you designed? I do believe you spoke about Stuyvesant High School, which is right near where I live—I love the building. 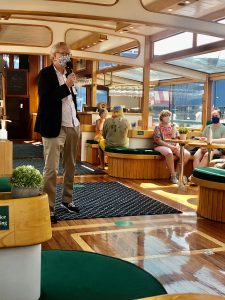 I was fortunate to work at some of the most interesting and well-known firms in New York and designed primarily corporate office complexes, affordable housing, academic projects, and yes, Stuyvesant High School in Battery Park City.  When I get a chance, I am proud to point it out on the boat tours.  That was with Cooper, Robertson Architects where I also contributed to the design of the master plan for Battery Park City.

The wood water tanks are part of the urban context of New York.  Even today if you see a high-rise building under construction you may spot the brand new wood tank being constructed.  We need them for buildings that exceed about 5 stories as the water pressure supplied by the city only goes that high.  So high-rise buildings need to supplement the pressure by pumping the water up to the top to create the head of pressure needed to serve the upper floors.  “Water seeks its own level; what goes down must come back up” is a basic tenet of physics.  There are still 2-3 companies in New York who have excelled at building and replacing these tanks.

“I also contributed to the design of the master plan for Battery Park City.”

At one time they tried stainless steel, but they got too hot in the summer and too cold in the winter.  The beauty of the wood system is that all the individual components can be broken down to a size that will fit on a typical service elevator in a residential building.  Rosenbach and Isseks Brothers are the two premier suppliers of these wood tanks. The Hudson River portion of the tour is the best illustration of this as the entire skyline above Riverside Park is dotted with these urban artifacts.

The goal of city planners is to fulfill the idea of an “Emerald Necklace” surrounding the entire edges of New York. This is a term borrowed from the great landscape architect Frederick Law Olmsted for his vision of parks in Boston.  The idea is to make the water’s edges accessible to the public in the form of parks, bike lanes, and esplanades.  Right now, it is possible to walk/bike from the Little Red Lighthouse on the Hudson River at the George Washington Bridge all the way down to the Battery.  As more and more industrial sites on the waterfront are abandoned, they become residential and parks.  In fact, in Brooklyn on the East River, for example, every new residential project is responsible to fulfill a component of the Emerald Necklace along the waters’ edge.  The most recent large scale parks, Hudson River Park, Brooklyn Bridge Park, Domino Park have all been born out of formerly industrial waterfront uses.  With the recent pandemic, our access to fresh air, open space, and landscape are more and more critical for our well being.  Since the boat tours have resumed, I find everyone wants to be on the outer deck to take in the views, and the fresh salty air once again.

While the city has embarked on numerous individual neighborhood and district master plans nothing was more visionary than when the city leaders decided on the grid system to grow the city in 1811.  Disappointed in how the city had grown more organically in the financial district or in the Village, they wanted a sound real estate idea as well.  The broad avenues marching north and south and the narrower streets east and west provide a pure form of geometric logic.  From the East River on the boat tour, we can look all the way across the island at 14th Street, which is considered the nominal start of the grid and the widest portion of Manhattan.  Then on the Hudson River, we can spot 155th Street at Audubon Terrace.  While the grid continues today in various forms above 155th Street it was truly a visionary idea for the city commissioners in 1811 to imagine the city would continue that far.

“I guess we could call it archi-tourism”

One of the big surprises for me when I first started giving these tours seven seasons ago was how few architects actually take our tour and yet how many real fans of architecture there are throughout the world.  I guess we could call it archi-tourism.  The fresh air, the great hospitality of Classic Harbor Line, and the unusual way to see the city – I call it from the “outside looking in,” are all compelling.  And then too, I trust our particular way of seeing the city and the buildings seem to genuinely interest people.  We find that on our AIANY walking tours also. You get to see the city as an architect sees it.  And yes, by the way, for professionals we also offer the all-important continuing education learning units required each year.  AIANY is the New York Chapter of the American Institute of Architects and we are the oldest chapter in the nation.  Since 2009, CHL and AIANY have collaborated to bring these tours to New Yorkers and visitors to the city.

“He said it is from the Proterozoic period, which was quite long but ended over 500 million years ago.”

In Central Park, one can find these large naturally occurring formations of something called Manhattan schist.  But up, on the Harlem River, I suspect, is the largest exposure of anywhere on the island of Manhattan.  I once had a geologist on board as a guest and I took advantage of this to quiz him more about it.  He said it is from the Proterozoic period, which was quite long but ended over 500 million years ago. That is a very difficult number to wrap one’s head around. It is a reminder of how small we are on this earth. This prong, as it is called, runs down the spine of the island of Manhattan and is one of the contributing factors that support tall buildings in Midtown and downtown in the Financial District, which are anchored into this bedrock.

Well, first of all, these boats are gorgeous.  Unlike the larger party boats and tourist offerings, we get a dedicated audience who truly want to hear our narration and have some of the best questions.  And New Yorkers, bless them, are the first to propose a different historical reference date, to expand my narration or “suggest” a correction.  It’s a tribute when I learn a tour guide from another city or even from New York has chosen our tours.

As I said earlier, I came here for a two-year stint and never left. Even when I do travel to the world’s best cities it is still a real rush as the plane approaches this amazing Gotham.  For an architect, this is IT. One of the greatest thrills for me is to walk a block somewhere in Manhattan and realize that I had yet never been there before.  For one city block, I can spend hours looking and digesting each building and trying to surmise how this block was formed in the development history of the city.

“Conducting these tours is a bit like taking a graduate-level course in the history of New York.”

I have always cherished the idea that we “practice” architecture.  Indeed, every project we do is practice for the next.  So, while I am largely retired these days, I like to introduce myself on the boat as “a practicing architect, practicing retirement.”  They both take a lot of investment. Conducting these tours is a bit like taking a graduate-level course in the history of New York.  I have learned so much in the preparation for these presentations and every season is a new “course” as there are so many more new projects on the waterfront as we go out again.

Joseph serves as the co-chair of the AIANY Architecture Tour Committee. He moved to New York following graduate school at Cornell University and planned a two-year stint to pursue his architectural career before returning to his roots in the Midwest. His plan didn’t work so well as he quickly fell in love with the city and has lived here for over 35 years practicing for well-known firms including Edward Larrabee Barnes, Mitchell/Giurgola, Cooper, Robertson, and FXFowle. Today, Joseph is a practicing architect practicing retirement so more of his time is spent conducting tours for the NY Chapter of the AIA including a walking tour of his neighborhood –Park Avenue South. He is a licensed NYC Sightseeing Guide. Teaching was always integral to Joseph’s career and his tours weave lively stories of history, biography, design, and current affairs with a passion that reveals his love of architecture. Joseph was on the design team for Battery Park City urban design and the lead designer of Stuyvesant High School seen on the boat tours.