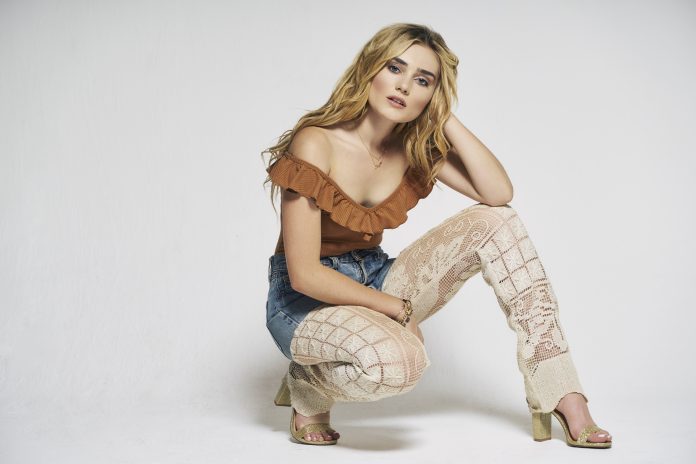 Meg Donnelly landed the part of Taylor Otto on American Housewife at age 16 and suddenly moved from New York City to Los Angeles. She was not cast in the pilot and was about to take a break from auditioning to be a normal teenager when she got the call that they wanted her for the series. Now in its third season, American Housewife is a hilarious look at suburban America and the families that do or don’t seem to “fit in” there. We chatted with the now 18 year old Donnelly about how her life has changed, her acting dreams, and her New York City favorites.

Downtown: You grew up in NYC, are you an Uptown or Downtown person?

Meg Donnelly: Neither really! Sort of in the middle. I grew up on 56th and 10th so Hell’s Kitchen, a little bit more Uptown I guess. I’ve loved growing up here, and we are so close from the water, we’re only two blocks from the Hudson River so it’s really nice.

Downtown: What did you start first: dancing, acting, or singing?

Downtown: When you were starting what was the dream?

MD: Ever since I was younger High School Musical was my thing, I was obsessed with it, it was such a big deal. Also Spongebob always had the musicals too and it is my all time favorite.

Downtown: Did you see the musical?

MD: Yes, I did! I see everything Spongebob, it’s the best, but my dream was to do a combo of theater and movies because I loved HSM so much. I think the things where you combine the two are the coolest, so when Zombies came around I was crying because that was my dream all my life.

Downtown: Do you have a favorite musical?

MD: I love Book of Mormon. I remember being 11 and listening to the soundtrack and thinking it’s so scandalous, I love this! I ended up seeing the show and it was so good. Also, of course Hamilton but that kind of goes without saying, it’s just kind of legendary. In The Heights is so good, “96,000” is one of my favorite songs, but my favorite of all time is Rent for sure.

Downtown: Would your dream role be in Rent?

Downtown: What was your life like right before you booked American Housewife?

MD: I was just going to high school here in the city, it was pretty normal. I had been auditioning professionally since I was 11 and I did jobs here and there but nothing really big. In the pilot for American Housewife they cast another girl and then they recast it and I was picked up for the series. After the auditions for the pilot I thought to myself, I was really close and I really wanted this role so I think I’m just going to take a break and just be a normal kid and if stuff comes up that’s cool but I just want to take a break. Right when I said I was going to take a break American Housewife was like just kidding! It was kind of a weird coincidence, and I’m so glad.

MD: Way different than here for sure. It was kind of a whirlwind because I was 16 and I was just going to high school like a normal kid and all the sudden it was like, “hey, you’re moving to LA tomorrow, congrats!” When I moved to, LA I didn’t know anyone out there. I slowly started connecting but I was also really shy because it was all so new to me and I didn’t know how long I was going to be there. When season two came around, and that was after Zombies, I knew more people, and they helped me so much to be more confident and outgoing.

Downtown: Does it feel like home there yet or are you still a real New Yorker?

Downtown: Did you start shooting for the new Zombies yet?

Downtown: Were you a Disney kid or Nickelodeon kid?

MD: I was both because Nickelodeon had some great shows like Drake and Josh, iCarly, Victorious, Ned’s Declassified, Zoey 101, that was my favorite, but then Disney Channel had like Wizards of Waverly Place, Zack and Cody, Hannah Montanna, High School Musical, it never gets old. There are shows on Disney Channel that I actually watch like Andi Mack, that show’s good.

Downtown: Do you think that if you weren’t in American Housewife you would watch it?

Downtown: What are some of the most memorable scenes or episodes that you’ve shot?

MD: The American Idol one was crazy. That one was so surreal because it was a normal day on set and then we went to American Idol to sing for the judges. We went to where the auditions were, but I just thought I was singing in front of my TV parents Katy (Mixon) and Diedrich at the set, and then we got to the set and they said, “oh, no, no, no, you’re singing in front of the actual judges,” and I was like, “Sorry, did I hear you right?” That was crazy.

Downtown: Was that a childhood dream?

MD: It was a childhood dream, and I was terrified because I’m on a TV show, if I mess up I can do it again, but these contestants have one shot and that’s it, the pressure is crazy.

Downtown: Do you have time to work on your music?

MD: Yeah, I’ve actually been recording music every day since I’ve been here in New York. The studio that I record at primarily is here, so every time I come here I’m in the studio every day. Sometimes people fly out to LA, and I’ll record there. I have an EP scheduled to come out in June while I’m filming Zombies, so that’s going to be crazy.

Downtown: Do you write or play instruments?

MD: I primarily write with this woman named Dahlia who is the best person ever, but I love writing. Every time I have an idea or a concept I’ll just write it down in my notes or a word will come up and I’ll write it down or text Dahlia and ask if it’s a good concept because she’s amazing. As for instruments, I play guitar and I dabble in piano, I never could really get the concept of piano but I’m working on it.

Downtown: What are some of your favorite restaurants in New York City?

MD: There’s a place called Ivy on 5tth and 8th, and it’s really good, they have the best veggie burgers ever. I’m not a vegetarian anymore but I used to be, and their veggie burgers are insane and they have these polenta fries, it’s so good. Then mexican food, there’s this place called Los Tacos which is really good, their guacamole is insane. On 50th and 8th, Don Antonio has the best Italian food.

Downtown: What’s your favorite area to shop in the city?

Downtown: Do you have a favorite museum?

MD: The Whitney, I love the Whitney. The ideal thing is to go take the subway to 23rd and 8th, and then just walk down. There’s this really good breakfast place that has amazing avocado toast, and then you walk, and underneath the Highline there’s all these mini museums and little galleries that you just go into for a second and walk out, and there’s always the craziest stuff in there, it’s so much fun. Then you go up to the Highline and then go to the Whitney and then walk to the village and see all of that and then to Washington Square Park and then to SoHo. Then they see the actual, real New York City because most people just see Times Square and Broadway and Rockefeller Center, which you have to do and it’s great, but if they want to see like the real sort of non-touristy stuff, if you’re coming to New York that’s what you should do.

Downtown: Do you have any one thing that has to be the first thing when you get back?

Downtown: How did you learn to speak Japanese?

MD: This is a crazy story. Basically there was this Japanese boy band that came to my school as exchange students. It was insane everyone, they were  amazing hip hop dancers but a lot of people were like, “Why don’t they speak English?” and I’m like, “because they’re from Japan, what do you mean?” They weren’t as nice to them and so they didn’t really get to learn English because they were just staying in their group the whole time. So I started hanging out with them, and my friends started hanging out with them as well, and I decided to learn Japanese even though I was going to make a fool of myself. I butchered it, and they laughed.

Downtown: Do you have the language skills to go there and have a conversation?

MD: Yeah, that’s what I did during the summer. I went there for two weeks with my family and I was my parents’ translator. I started learning from the guys and YouTube videos and now I actually take lessons because I didn’t know it was going to go this far.

Downtown: Now that you live in LA have you learned how to drive?

MD: No, I haven’t and I have no excuse! It’s on the list. I have the course and I’ve been studying it for the written test, but I just haven’t done it yet. They put it on the show, and the car was in neutral, and they pushed me, I swear, no joke, but I’ve been in LA for like two and a half years now, I have no excuse.

Downtown: What should viewers look for in the rest of the season?

MD: There’s this really great episode coming that actually was so much fun. I don’t want to spoil it but it has to do with Peyton Meyer (Trip) and Franklin (Evan O’Toole) who’s Anna-Kat’s best friend. It is the funniest episode, I think I laughed the whole time we were filming, oh my god it’s so funny.

American Housewife airs on Tuesdays at 8:00 PM on ABC.