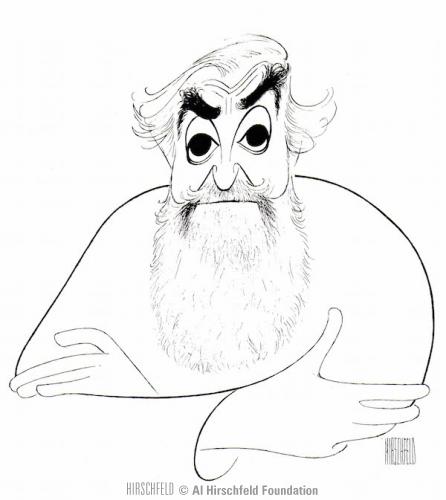 To many New Yorkers, decades of Broadway Theater characters were brought to life through the iconic animated portraits drawn by Al Hirschfeld.

These caricatures were published weekly in The New York Times, and became a staple tradition of each show to hit The Great White Way.

Hirschfeld created portraits of many of the most famous New York actors and personalities throughout his life, adding his unique and distinguishable style to each portrait.

Now, New Yorkers can experience the best of Broadway through October 22, at the amazing “Hirschfeld Century” exhibition at the New York Historical Society.

Hirschfeld‘s singular style is makes him one of most significant figures in caricatures. His influence is seen in the art of many contemporary artists, illustrators, and cartoonists.

His caricatures are executed with stylistic simplicity, black ink, and drawn with an actual crow’s quill.

His art career spanned decades, historical milestones and artistic movements. But his technique always remained much the same – capturing the personality of his subject in simple and instantly recognizable illustrations that bring a smile to the eye of the beholder.

In 1945, Hirschfeld and his wife had a daughter named Nina who’s name he forever and faithfully hid in ALL his illustrations. Historians and fans alike often recount fond memories of growing up with the Sunday tradition of “counting Ninas” which was Hirschfeld’s subtle testament to his daughter.

Renowned New York developer and art collector Elie Hirschfeld, whose fondness for pieces with a New York connection is a great admirer of Hirschfeld— who was a close friend of his family and a distant relative.

“I have long been a fan of Al Hirschfeld,” says Hirschfeld, the collector of the artist who passed away in 2003. “It is amazing how he captures so much with so few strokes of his pen.  He made several portraits of my family and captured each one of us perfectly.”

“He is the consummate New Yorker and I am proud to have many wonderful works by him in my collection.”

See New York culture through the work of Al Hirschfeld at the New York Historical Museum on exhibit until October 22.