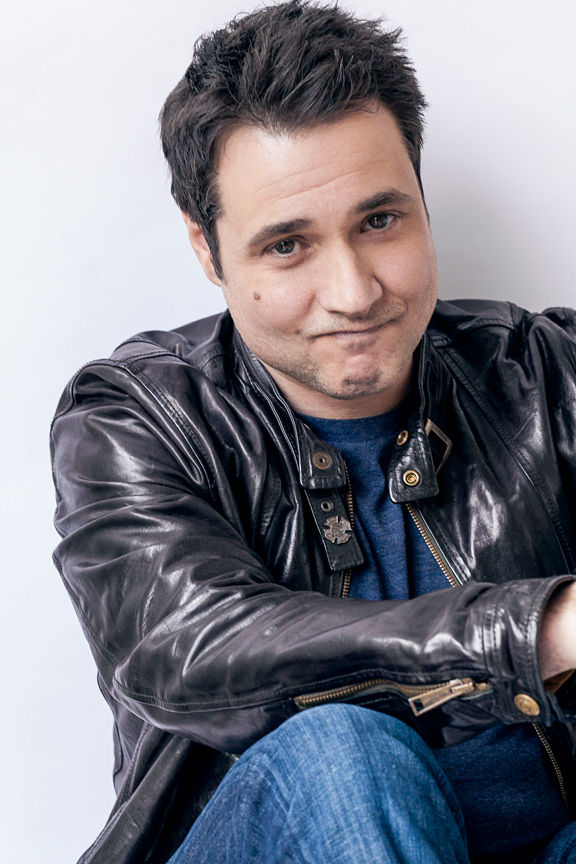 For stand-up fans, Adam Ferrara has been an important headliner for over two decades. He has appeared multiple times on all of the late night staples (e.g. The Tonight Show, The Late Show), had highly-rated comedy specials, and has become a regular on a lot of radio shows. He continues to keep active as a comic, and will be performing two shows a night at the Gotham Comedy Club on Feb. 19 and 20, alongside Marion Grodin and Buddy Bolton.

But plenty of people primarily know Adam Ferrara as an actor and host, and not for his stand-up success. For example, Adam is one of the hosts of the American adaptation of Top Gear; the original U.K. version of which arguably being the world’s most popular TV show. Adam played Chief “Needles” Nelson on several seasons of the Emmy-nomination show Rescue Me. He was NYPD Sgt. Frank Verelli on nearly two dozen episodes of Nurse Jackie. On a less dramatic level, he was one of the leads in Paul Blart: Mall Cop.

I had the pleasure of conducting Q&A with Adam about his past, present and future on behalf of Downtown. For those on the fence about attending one of his shows at Gotham, there is a contest being presented by Top Gear in which someone will be able to take home the 1968 427 Corvette Coupe parked outside the venue; more details on this can be found at www.buildandsearch.com/register. Otherwise, for great stand-up videos and all things Adam-related, click on over to www.adamferrara.com. Having appeared in dozens of episodes of Rescue Me and Nurse Jackie, when did you realize that you could act?

Adam Ferrara: I discovered instincts through stand up that I knew wanted to know more about so I studied acting with Stephen Book at The Stephen Book Acting Workshop in Los Angeles. He teaches an improvisational technique and I cannot recommend it enough.

Is there any chance of the U.S. version of Top Gear coming back for a sixth season?

A: I hope so we are shooting season 5 right now and having a blast. We just got back from filming in Cuba and next week we’ll be at FT. Irwin in California filming with the army. The three of us have been through so much together, we’ve gone from colleagues to friends to brothers and still want to continue.

You’ve been a headlining comic for over 20 years, but when you’re doing stand-up, do you find that a lot of people came there because your TV work?

A: It’s a mix. I have people that come who know me from my stand-up, Top Gear, Nurse Jackie, Rescue Me. I always come out after the show to say hello and take pictures, and sometimes hear people saying stuff like, “You’re right, he’s also the guy from Mall Cop” and “I didn’t know he was a stand-up.” Which always makes me think, “I’m glad you came but what did you expect I was gonna do?”

Is there a comedy club that you look at as your home club?

Where did you get your start as a comic? East Side Comedy Club?

A: I started on Long Island at the East Side Comedy Club, which is now a Pomodoro restaurant. I made the mistake of telling my mother I was going to do stand-up, and unbeknownst to me she told the whole neighborhood and everybody showed up. So I had to be funny or I wouldn’t be able to show my face at the mall for a while.

Who were some of the comics that were very instrumental in your development as a comic?

A: I saw Richard Pryor on video tape when I was a kid and I was mesmerized. I didn’t understand a lot of it, but I remember saying out loud, ”Look at what this man can do.” I didn’t consciously make any decisions or even know I wanted to be a comedian, but when the time came, I believe that experience led me to be a confessional comic. I draw from my life and strive to connect on a visceral level. Pryor’s story telling was spiked with pathos and he had the artistic courage to let a moment breath. Do you still identify as a Long Island comedian? Or do you primarily look at the Island as where you grew up?

A: That’s a great question. It’s where I’m from and my family is still there. There are sensibilities and thought process that come from there and I take pride in being from Long Island. I was steeped in that style of performing as well. Using the whole stage with your movements, setting scenes, using voices, facial expressions anything and everything to communicate to the audience.

I employ more subtleties now and open moments up more, which I suspect is part of evolution. I guess in answer to your question, you can take the boy out of Long Island…

Is there a professional accomplishment that you’re most proud of?

A: I’m a lucky man. I’ve been through all the rights of passages a comic can go through — Letterman, Leno, Fallon, etc. I’ve played Carnegie Hall, Radio City, The Apollo [Theater], Madison Square Garden.

Had my own stand-up specials. I’m afforded the opportunities to act on TV and in the movies doing comedy and drama, but I wrote a bit that is now part of the curriculum at NYU and Yale. It’s the chemo bit from my third Comedy Central special called Funny As Hell. I wrote it about my dad and was pretty proud of it because it communicates my feelings about him. The structure and timing serves the emotional changes, and I have arrived in place as a performer where I have the balls to do it…

After the special aired I got a call from author and professor Eddy Friedfeld asking me if he could include the clip in his classes. I’m very pleased at this unexpected outcome that has allowed me to contribute.

Shows at the Gotham Comedy Club aside, what else is ahead for you at the moment?

A: I’m going right back into production on Top Gear. After that, I’m going to finally get a chance to finish work on my next stand-up special.

When you’re not busy with your career, how do you like to spend your free time? Is it true that you’re a musician in your off-time?

A: Free time? What’s that? You are very generous using the word “musician.” I play “bar band guitar.”

Finally, Adam, any last words for the kids?

A: Get off the lawn.