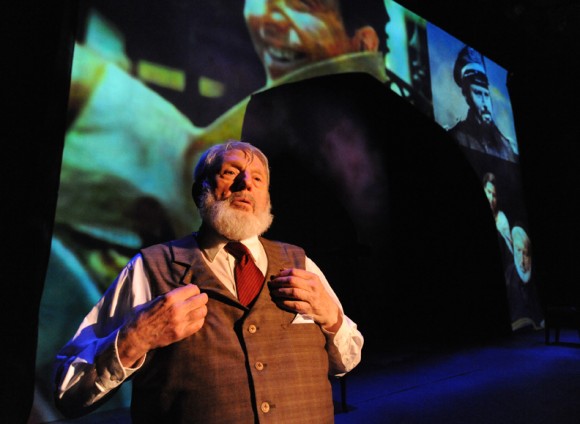 A star-studded collection of artists from a wide spectrum of artistic disciplines will gather at the Washington Hebrew Congregation to pay tribute to the star of stage, screen and sound.
Among those expect to perform or attend are such luminaries as Tom Paxton, Dr. Hans Peter Manz, Amichai Lau-Lavie and David Amram. Judy Collins, Arlo Guthrie, and Peter Yarrow are expected to provide video tributes. Mr. Bikel will perform a selection of his favorite songs, accompanied by Folksbiene Artistic Director Zalman Mlotek.
Mr. Bikel was born in Vienna, Austria, but on the eve of World War II emigrated to what was then, Palestine and is now, Israel. He lived on a kibbutz but left when he realized his future was in performing and not agriculture.
He went on to graduate from the Royal Academy of the Dramatic Arts in London, before moving to America where he appeared in numerous memorable film and TV roles.
He has more than 40 records, founded the Newport Folk Festival with Pete Seeger, and through it all fought for workers, peace and freedom. He received an Academy Award nomination for his role in 1958’s groundbreaking film, The Defiant Ones, and has played the role of Tevye in Fiddler On The Roof more than any other actor.
“Theodore is not only an American icon, he belongs to the world,” says event co-sponsor and New York developer and real estate luminary, Elie Hirschfeld. “His work on the behalf of the arts in this country and in support of the State of Israel has been beyond exemplary. I am proud to call him my friend.”
The event-5:30 p.m. at the Washington Hebrew Congregation (3935 Macomb St. NW, DC)-is a benefit for Moment Magazine and its Daniel Pearl Investigative Journalism Initiative. For more information please go to: Momentmag.com/Nov16 Theodore Bikel in Fiddler on the Roof

A film celebrating the artist’s life titled Theodore Bikel: In the Shoes of Sholom Aleichem is now available for festival and event screenings.

Things to Consider for Start up Owner’s