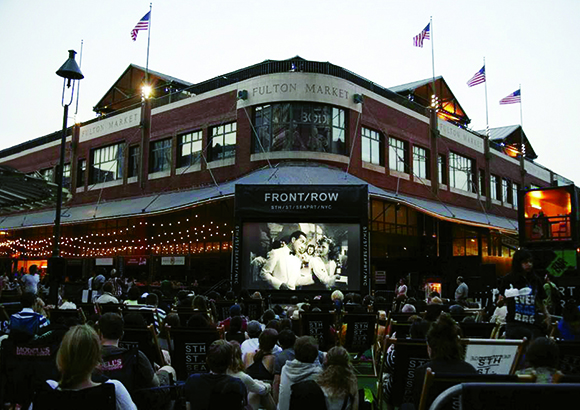 Howard Hughes constructs a New Pier 17 for the future, while embracing its past.

Manhattan’s South Street Seaport has a long and storied history in the annals of New York City. The harbor was the genesis of New York’s commerce and in many ways is the birthplace of The Big Apple.

However, stories of triumph are incomplete without pitfalls that give cause for a continued rise in prominence. Nearly two centuries of wear and tear, not to mention the devastation of Hurricane Sandy in 2012, left much of the area damaged and in serious need of a jump-start to regain its eminence.

Then along came the Howard Hughes Corporation, which has initiated a redevelopment plan to bring South Street Seaport Pier 17’s once thriving harbor back to its former glory, as well as to integrate the benefits it will bring to the surrounding community. Phillip St. Pierre, Howard Hughes’ senior general manager of the Seaport, said this project is both a necessity to the Lower Manhattan community and a gratifying experience for his company.

“We’re really proud of what we’re doing here,” St. Pierre said. “We think it’s important, and we’re committed to it.

We’re going to continue to do this until our Seaport can stand on its own feet again.” The South Street Seaport’s origins go back to the 1600s, when the Dutch and the British used the waterways to establish trade lines for some of the country’s first-ever settlers. By 1815, what was then known as the Port of New York became one of the most important commercial centers in the world.

As the 20th century unfolded, the port lost its reputation as a center for international commerce in the wake of the Industrial Revolution, and by the late 1950s, the docks of the former commer- cial haven were mostly empty. The South Street Seaport was added to the U.S. National Register of Historic Places on December 12, 1978, but in the ’80s the port was transformed into a tourist destina- tion characterized by a shopping mall and festival marketplace. Despite its status as an historic landmark, South Street Seaport’s new focus on tourism alienated area residents and ignited debates of commercialism versus historical preserva- tion that have been raging ever since. the gap between progress and community connection with its redevelopment plan for Pier 17. Lincoln Palsgrove IV, director of marketing for Howard Hughes, says the corporation’s plans began in 2012 before Sandy hit, but the storm only motivated them even more to move forward.

“We wanted to engage people back here,” Palsgrove said, “and let people know the Seaport suffered damage from the storm but was not by any means down for the count, just to get the word out that we were coming back here.”

In order to convince the community of the Hughes’ commitment to being a good neighbor, the See/Change marketing program was launched last year to engage visitors and locals with events and programs on the site, even though the reconstruction won’t be complete until 2016.

“We are always going to be running a lot of vibrant, free outdoor programs, even when the new Pier 17 opens,” Palsgrove said.

The campaign brings to the port free public events that feature entertainment of all forms. Front Row Outdoor Cinema runs every Wednesday and Saturday nights during summer; modern and classic films are screened, with the weekday screening themed as family night and the weekend as date night. So far, the average turnout for each night is around 700 people, according to Palsgrove.

In addition to free movie screenings, See/Change features daily musical performances by musicians and DJs, face painters and food trucks. Even though the new Pier 17 is a long way off, Palsgrove said they’re using Fulton Street as an incubator for creating these programs they expect to run when the pier is finally open.

Construction has posed challenges to the company’s efforts to foster immediate community involvement. Their solution was to build living and active barricades around the developments currently underway by converting a stack of shipping containers into temporary store fronts and illustrating the history of New York City on the fences blocking off the old water platform. The results offer opportunities to invite neighborhood people in during the transition, rather than block them off.

St. Pierre said these activities are a cen- tral part of Howard Hughes’ efforts to affirm the importance of South Street Seaport.

“Post-Sandy, there was no activity here, because there was no reason for people to be down here,” St. Pierre said. “So we had to solve that problem. We couldn’t get the shops back open again that quickly, but we could certainly try to create some energy and give visitors something to do while they were here.”

The plans laid out by Howard Hughes Corp. have been met with hesitation by some members of the community. The main point of contention is the proposed plan for the former New Market Building, which will be completely demolished so a new 50-story condo/hotel tower can be built in its place.

In order to address these concerns, Howard Hughes supported the formation of the Seaport Working Group: a group of local officials and community members who gathered to form guidelines and recommen- dations for redevelopment in the Seaport District. St. Pierre said the concerns raised by SWG are almost entirely in line with the proposal as it stands, with the exception of the New Market Building issue. [Continues…]

The Rebirth Of A Landmark is the Development article of DOWNTOWN’s Summer 2014 edition. If you would like to continue reading the entire article, you can find our latest issue on newsstands now! Or you can subscribe to DOWNTOWN Magazine for home delivery by clicking here.