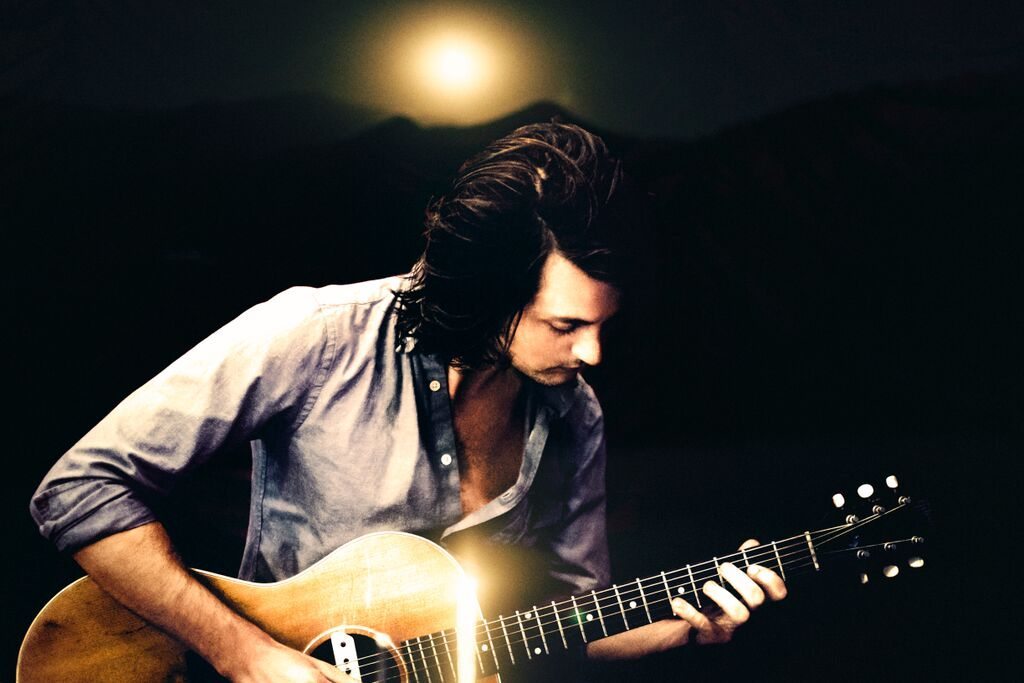 I first met Taylor Locke five or six years ago through our mutual friend Mike Viola. At the time, Taylor was the guitarist in the band Rooney, who had been famous for hit singles like “I’m Shakin’” and “When Did Your Heart Go Missing.” While still in Rooney, Taylor had started up Taylor Locke and The Roughs, who released two full-length albums in 2010. All the while, Taylor dabbled in other musical projects like the short-lived L.A. power-pop supergroup MOGUL, the surreal (Kim Fowley-approved) web series Planet Rocke With Taylor Locke, and serving as Mike Viola’s bassist for a tour of Denmark.

Fast-forwarding a few years, Taylor has a lot going on in his post-Rooney life including a new solo album, Time Stands Still. Taylor also remains a part of the non-ironic, yet authentically-costumed Fleetwood Mac tribute band known as Rumours, playing the Lindsey Buckingham role. As noted within our Q&A-via-email, Taylor enjoys both playing the “team-captain role and supporting roles,” which helps to explain the variety of projects he takes on. Naturally, Taylor did not disappoint with his responses, injecting a good amount of humor in with the honesty. I believe you were a teenager when your old band Rooney signed its first record deal. Before that happened, were you planning on a traditional path of college?

Taylor Locke: I applied to lots of colleges. My dad and I took campus tours on the east coast. When the record deal came, I deferred from Sarah Lawrence College. Had I gone, I would probably be in a Fourth-Wave/Neo-Feminist/Artcore/Electro-Folk/Post-Algebraic/Norm-Core/Anti-Band. (That’s one genre….and they teach it there.)

A lot of your peers were also teenagers who signed record deals like Maroon 5 (then called Kara’s Flowers), Phantom Planet and The Like. Was that a blessing to be around? Or do you think that everyone would have been better off getting signed a few years down the road?

T: It’s working out quite well for Maroon 5, wouldn’t you say? Getting signed back then was fantastic because we got to ride the last wave of the old school music biz, before piracy. Having more time to gestate on an indie-level would have served us in terms of maturing and coming into our own before being thrust into the big leagues. It would have earned us more credibility, and perhaps kept us together longer. But that’s what psychiatry is for, right?

Looking back at your decade or so with Rooney, are you proud of the band’s legacy? Or in looking back, does it feel like it was more of a “high school band” and huge learning experience for you?

T: It was a privilege to visit so many incredible places and have eager audiences to play for. Europe and Japan were particularly fantastic. Witnessing the in’s and out’s of radio and television was an eye-opening education. It seems that kind of exposure is much harder to come by these days. I was a bit stifled in the group, and have grown considerably as a musician since then.

What led to your decision to do a “solo” album away from The Roughs?

T: This album wasn’t conceived under a specific banner. I have a home studio, so when I have a song written, I can just get busy recording it. Lately I’ve recorded multiple versions of the same songs, just to see what works best. A clear idea of a project, such as a band identity or a concept album offers a concise framework, but for Time Stands Still I didn’t haven’t that luxury. I just took it one song at a time, and at the finish line it sounded like a solo album. (Actually, I wanted to name it The Fowleys, but Kim Fowley threatened to sue me.)

How would you describe your new album Time Stands Still to someone who may only know your work with Rooney or with The Roughs?

T: It’s a bit mellow, and more lyric-driven. It has a folky side to it that I hadn’t explored on past records. For the purpose of it being an introductory solo album, I didn’t want to have too much production going on. It’s very straightforward. Lately I’ve been experimenting with more ambitious sounding recordings.

Where did the idea for the “Call Me Kuchu” music video come from? Did you have any hesitations about the backlash that it may cause for its political message?

T: Backlash from who, Ugandan anti-gay fundamentalists? Are they gonna come to my house? No, I didn’t wrestle with any hesitations, I’m not going for right-wing or religious appeal. The video was meant to inject a little humor into an upsetting subject matter, as is the melody and rhythm of the song. We’re talking about a terrible thing, but it’s actually an upbeat tune.

Do you have a long-term plan for your musical career?

T: I’m wearing a few hats as a musician these days, and I like it that way. I intend to record and perform indefinitely, hopefully in a variety of contexts. I like switching off between the team-captain role, and supporting roles.

Whenever someone starts talking about how the music business today is horrible and it’s hard to make a living, how do you manage to stay positive? Is there a way that you keep yourself focused and moving forward?

T: I find inspiration in the group of musician friends that I have. I’m surrounded by awesome players, singers, record-makers, and performers. I see my peers doing great work, and it motivates me to keep at it. Was the experience of portraying Lindsey Buckingham in a Fleetwood Mac tribute band an experiment of sorts? Or just meant to be fun?

T: I still portray Lindsey in Rumours, the Ultimate Fleetwood Mac Tribute show. We’re going on three years now and we’re the best in the business, no doubt. I like the songs and the people in the group, so that makes it a good gig in my book. We have a lot of laughs and the music sounds spectacular. I find its influence showing up in my own work. I hear Mac-isms in my playing and writing that weren’t there before. It’s challenging me and opened up some new areas of my musicality.

Beyond music, is there a field that you’d ever consider working in?

T: I’d love to be a staff writer on a comedy series.

Is touring something you’d like to do more of soon? Or did your time with Rooney burn you out on it?

T: I’m fond of the road, but I also love my house and my girlfriend. I’d jump at the chance to open for a well-established act, or play guitar for a big-time singer. Headlining my own tour sounds strenuous. Would I have to drive the van?

What is the best advice you ever received with regards to going on tour for the first time?

T: Lose 10 pounds beforehand, so the 10 pounds you gain on the road will just bring you back up to your regular weight. Just remember the acronym “S.T.U.W.,” it stands for: “Start Tour Under Weight.” (I hope this reads as a joke.)

Is there someone whose career you model yours after as far as work ethic and decision-making goes?

T: Sure, there are a handful. I keep an eye on musicians that are aging gracefully. We are a youth-obsessed culture, especially in rock ‘n’ roll. It’s great to see guys like Nick Lowe, Richard Thompson, Jackson Browne, and even Lindsey Buckingham keep pushing themselves as recording artists and performers. Actors, directors, authors, and painters all seem to improve with age, so why shouldn’t musicians?

What are the apps or tools you rely on most to stay organized and productive?

T: Borrrrrrrringggg. Just kidding. I write ideas down in a notebook or my phone. I’m meticulous about making voice notes when I’m working on something new.

When you’re not working on music, how do you like to spend your time?

T: I go out to see lots of stand-up comics. I’m fanatical about it. I have several favorites that I follow religiously, and I love watching the process of their material being crafted and polished. I listen to podcasts and read tons of biographies and auto-biographies. I also have some side-business endeavors that are too boring to mention.

Finally, Taylor, any last words for the kids?

T: Grow up already. Just kidding. I still am a kid.