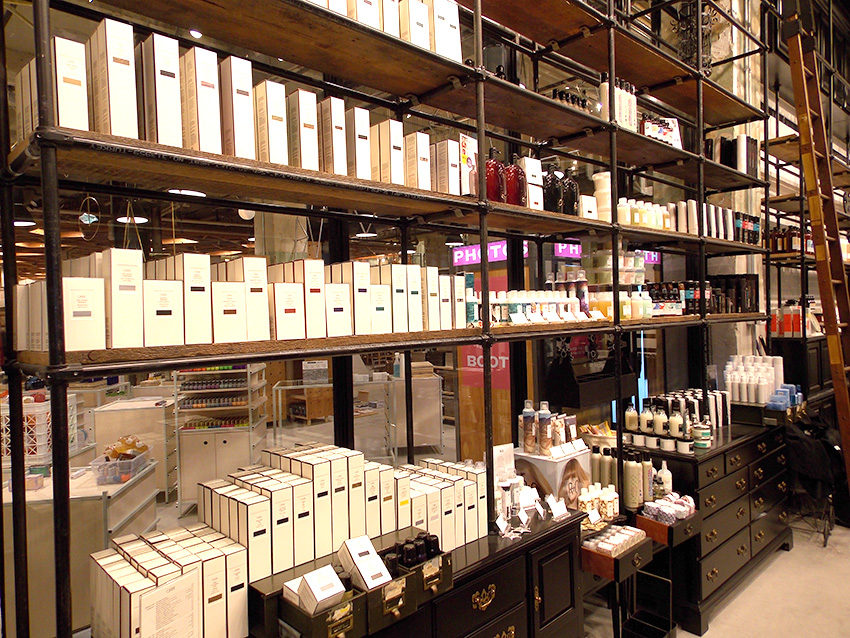 Beauty salon Hairroin launched its new New York City branch on Friday, July 11th. With a name like ‘Hairroin,’ provocative was no doubt the angle that the salon planned on taking when it first opened its doors to customers back in Los Angeles. Now it’s giving the Big Apple a dose of fearless hair artistry, inspired by the individuality of its dedicated stylists and clientele. DOWNTOWN paid a visit to Hairroin‘s new outlet near Times Square for a preview of what the quirky salon has to offer the East Coast–and we were obsessed.

Located adjacent to an Urban Outfitters, Hairroin keeps its external appearance low-key. This exterior is a huge contrast to what the salon has in store for its customers on the inside. Upon walking in, we were greeted by an ambiance reminiscent to that of stepping into a vintage boutique–think iron-wrought chandeliers, randomly placed mason jars filled with crustaceans, and wooden ladders leaning against tall shelves stacked high with products galore. It all seems intriguing at first, but we learned that it was part of the brand’s mission to keep its image original and “un-salon-like,” as a stylist described. The result is an unpretentious beauty bar, with the potential to rival many of the top salons in the New York industry.

Hairroin was founded by celebrity stylist Janine Jarman in 2005, gaining a following among famous names in entertainment and fashion over a short period of time. The salon raised controversy over the distribution of its pens designed to look like hypodermic needles, with the words “I Love Hairroin” on them–a nod to the cheeky name of the store. Of course, that did not hinder the company from promoting themselves with the faux-pas marketing strategy. It is about as racy as advertising gets, but if the saying “no publicity is bad publicity” is true, then Hairroin is clearly maximizing the benefits from the attention it’s receiving.