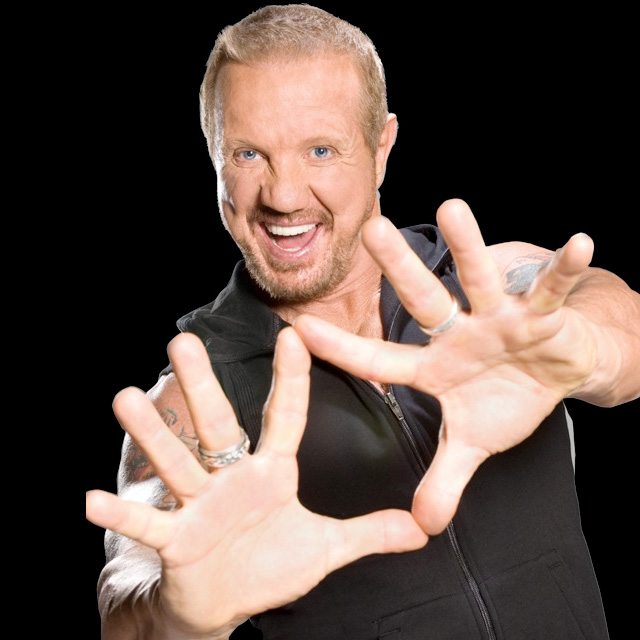 Throughout the 1990s and early 2000s, Diamond Dallas Page was regularly watched by millions of people as one of the world’s top professional wrestlers. While a major wrestling legacy and the occasional acting role may be enough for many retired wrestlers, DDP reinvented himself a little over a decade ago. The New Jersey native developed a yoga fitness program – now titled DDP Yoga – as based on the workouts that helped him overcome the back injuries that nearly ended his wrestling career. Word of mouth about DDP Yoga spread quickly, ultimately leading to a 2014 appearance on the hit ABC show Shark Tank, as hundreds of thousands of people are now DDP Yoga loyalists.

Beyond the workout itself, one thing that separates DDP Yoga from other yoga programs is the man behind it. Diamond Dallas Page – who has referred to himself on numerous occasions as “Mickey Mouse with tattoos” – is the rare approachable fitness guru. As I spoke with him and wife Brenda inside the cafeteria of 1515 Broadway, numerous people recognized him and approached DDP to say hello and get a photo. Not only was he happy to meet everyone, but he warmly chatted with each individual person, learning their name and answering any questions they had. When it came time to my questions, Dallas remained both candid and inspirational, full of both anecdotes and energy.

At time of interview, Dallas and Brenda were in New York for a pair of DDP Yoga workshops at Pure East (203 East 86th St.). Part 2 of our Q&A will post shortly, covering more of DDP Yoga’s origin and overall. But for more information on future DDP-related events and the program itself in the meantime, click on over to www.ddpyoga.com. In interviews, I’ve heard you talk a lot about your mentors in the wrestling world, like Dusty Rhodes and Jake “The Snake” Roberts, but I’ve never heard about who mentored you in the business world. Who were some of those people?

Diamond Dallas Page: That’s interesting…Tony Robbins from watching what he did…I was watching his first infomercials when he was like 25 and I was 29. I got him. I grew up with A.D.D. and dyslexia, so I was reading at a third grade level at the age of 30. So everything I learned was voice-activated. (laughs) You can listen to tapes over and over again and figure out what works for you. I swore that one day I was going to be on his show, that was my goal, and I did my own [a weekly program called DDP Radio]. (laughs) Of course he did infomercials at a time when it was unbelievable.

I’ve studied his other DVDs, he has a lot of philosophies that are very much the way I feel, and I love his positive energy. About two and a half years ago, I went to a workshop over the weekend where he gets you ready to walk on fire. (laughs) All this stuff that he did, I realize that I do it all. The only place I wasn’t doing it was in my personal life, and that’s when I committed to Brenda and we have the relationship that we do today. It applies to about everything. I think that Tony is someone from the outside.

No, who said that?

D: Henry Ford, and what the fuck did he ever do? (laughs) He didn’t invent the car, but he did invent the assembly line and so many other things…They said he was ignorant in some top paper, which would be like saying NBC News was saying he was ignorant when there was only a couple of [TV] channels. He sued that paper and one thing that came out of it, when they brought him up onto the stand, he said, “I have 12 different buttons. If I want to know something about physics, I press button number one. If I want to know something about sales, I hit button number two…I have all the knowledge right here at my hands, how does that make me ignorant?” He won a million dollar lawsuit from a big paper when a million dollars was a million dollars…I follow stories like that.

Muhammad Ali, I look at how he lived his life. A lot of people thought back in the day, when I was growing up, that he didn’t want to go to war. That motherfucker wouldn’t have gone to war, the generals would have paraded him around like a peacock. He didn’t want to go against everything that he believed in when the black man was treated like a slave…and you’re going to go die for your country, and he didn’t want to do that…So when you walk away from your [boxing] championship in your prime, and your views of your life make you go, “I’m not going to do that because I have to live with me,” and you give up money and everything else? That’s powerful. Saturday Night Live did a bit with Al Franken: “I’m a good person, I like me.”

D: Yeah, they made fun of it, but it’s so true. You have to do that. And then I’m reading this quote – I like to look at Brainy Quote [www.brainyquote.com] – that put it all in perspective. It said: “The repetition of affirmations leads to belief, and once that belief becomes a deep conviction, things begin to happen.” Muhammad Ali, I never knew he said that…Now think about what he said a million times: “I’m the greatest of all time.” When they picked the top 100 athletes of the last century, [he’s] number one. Now, was he number one? He is listed in the record books as the number one athlete.

D: So you say, who are my mentors? I watch people lead by example and I follow that.

That makes a lot of sense. You were known while you were wrestling for being innovative and a smart businessman, but that was generally behind the scenes. How did you transition into being a businessman in the public eye?

D: They didn’t know that I ran nightclubs since I was 22 years old. I’d already been in the business world, to me, it was fun. I’ve never had a real job in my world. I always tell kids and adults all the time: Find something you love to you and get someone to pay you to do it. I’ve always been able to do it. So when I got to the end of my wrestling career, this journey’s already started, because I’m the guy that wouldn’t be caught dead doing yoga. I’m that guy when he was younger that made fun of all that shit…But when you blow your back out…That’s bone on bone and that’s excruciating. I figured out a way using yoga, rehab, old-school calisthenics, and something I call dynamic resistance, which is merely isometrics and isokinetics. Isometrics is pushing without moving but engaging everything…So put weight there or don’t…

Squeezing muscles every time you flex or engage, your heart has to beat faster to get blood to muscle. Literally I can take my heart rate from 80 to 130 [beats per minute] in less than a minute standing still, just engaging muscles. Arthur [Boorman], the disabled veteran [whose DDP Yoga-based story has been viewed well over 10 millions on YouTube], I have his heart rate down to 60, I filmed it. He’s done 24, taken his heart-rate down, and taken it [up] to 160 in a minute, never moving, just engaging. That’s something that became a part of this workout. In three weeks I felt a significant difference with the yoga positions. Then I mixed it with rehab and old-school calisthenics.

In less than three months I’m back in the [wrestling] ring. At 42 [years old] they said my career was over, at 43 I was the [WCW] world champ, so I’m going to keep doing something like that. I follow people who lead by example, so if I find something that works, I’m going to do that. I’m going to do better and better, I’m never going to tap out because there’s always some place to go…I’m three months from 60 and I’m going strong in certain areas. I’m breaking up scar tissue and feeling better in areas where I beat my body up [from ages] 35 to 49. When I start to share it with somebody…I mean, I gave it away for years. I still give it away left and right. Does it have a market to make money? Hell yeah, we’re a lot of making money, but it took 10 years before it made a dime.

I’m flying on a plane three months ago, and behind me to the left, I get a tap on my shoulder. It’s a woman about 50 pounds overweight, she hands me a napkin with something written on it. She said, “I do DDP Yoga, I love it, it’s changing my life. I know I don’t look like it now, but I’m down 20 pounds and it’s coming off. I just want to thank you.” It had an arrow on the other side, it said, “Einstein said that ‘it’s not that I’m so smart, it’s that I stick with the problem longer.'” That’s what I do. It’s not that I’m that smart (laughs), it’s that I find something I’m passionate about…I will tell every single person that I’m going to change the world. This is gonna be a half a billion dollar company.

That comes back to the affirmations you were talking about…