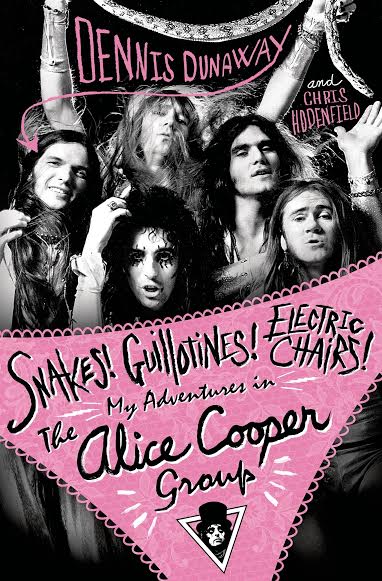 As the bassist of Alice Cooper from the band’s founding through 1974, Dennis Dunaway was around for a lot of amazing times. A co-writer of Alice Cooper classics like “I’m Eighteen,” “School’s Out,” “Elected” and “Under My Wheels,” Dennis is arguably one of the only musicians to have songs covered by Alvin & The Chipmunks, the cast of Glee, and Gwar. Yet the Alice Cooper years are only a small part of Dennis’ story.

Years in the making, June 2015 brought upon the release of Snakes! Guillotines! Electric Chairs!: My Adventures in The Alice Cooper Group. Written with Rolling Stone scribe Chris Hodenfeld, Snakes! is unbelievably-detailed for a guy that was in the midst of the rock and roll lifestyle for so long. But unlike many of his peers — spoiler alert — Dennis made it through that decadent journey with his marriage and well-being maintained, and never stopped making music.

In addition to Snakes!, Dennis is also promoting Dr. Dreary’s Snakes! Museum, a rare collection of Alice Cooper artifacts that will be showing at this year’s Chiller Theatre Expo. Running from October 23rd through 25th at the Sheraton Parsippany, Dennis’ Alice Cooper bandmates Michael Bruce and Neal Smith will also be on-site. For those who never leave Manhattan, as noted below, Dennis may also be making a local appearance on November 8th.

As arranged with Kathryn at St. Martin’s Press, I was fortunate to connect with Dennis Dunaway for some Q&A. Not only did he provide great responses to my questions, but I was blown away by his humility. Dennis Dunaway: Keith Richards’ Life proved that rock books are still in demand, which helped me get published. Mary Karr’s Liar’s Club gave me the confidence to write in the slang style that was appropriate for the Alice Cooper group. Steven King’s How To Write has great tips for any writer.

Overall, was the process of writing a book as fulfilling as you had hoped?

D: It’s an enormous amount of work. It’s like recording five albums at once, but it also has a very satisfying return in terms of people feeling like they have a personal insight to what makes you tick.

I’ve read in interviews that this book doesn’t have all of the great stories and everything that you necessarily wanted to say. Is there a possibility of another book from you in the future?

D: Music is calling me before I can even begin to think about a second book. There are plenty more stories, but Snakes! has captured the essence of the original Alice Cooper. I set out to do that. It took eighteen years and I’m proud to say I’ve achieved it.

Given all of the good times that you had, as emphasized by the book, how was it that your memory has stayed so lucid and detail-oriented?

D: That’s in my family. My dad and uncles were always reeling off detailed stories of their youth around campfires. Plus my wife Cindy [Smith Dunaway] was there every step of the way, so Snakes! had the advantage of having two memories that have never been apart.

As a New York-oriented publication, I figured I’d ask: What do you remember most about your first trip to New York?

D: Friggin’ insane fast cab rides! It’s not like that anymore, though. I also remember being frustrated because New York just didn’t get us until we were on top.

Do you have any gigs coming out in the New York City area?

D: Nothing confirmed at this time, but I pop up here and there a lot. Perhaps on November 8th at The Stone when Nick Didkovsky’s band plays the entire Pretties For You album live.

What’s to be expected from your upcoming appearance at the Chiller Theatre Expo in New Jersey? Is that an exhibit that you’ve brought on tour before?

D: Chiller Theatre and I have been planning this for years. It will be their 25th Anniversary show and Dr. Dreary’s Snakes! Museum of Rare Alice Cooper Artifacts will be the most comprehensible, mind-blowing collection of original items ever seen. Michael Bruce and Neal Smith will be there.

Prior to getting on-stage for that Alice Cooper reunion show last week at Good Records, was there a band rehearsal?

D: Sort of. Neal, Michael and I ran through most of the songs while getting the bugs out of the equipment. But those are songs we’ve been playing for years and as soon as we start, they just sound right.

How exactly did that reunion wind up happening? Did one person try to organize it?

D: I have my secrets on this one. I will say that Chris Penn, who owns Good Records, contacted me last November and we both pulled a lot of strings, rattled some chains and called a few favors to make it happen. But it only happened because the original group are all friends and the opportunity was there.

You’re still very active with Blue Coupe and 5th Avenue Vampires, but do you hope to do another world tour at some point?

D: I know lots of talented people that have fun making music. That’s what I do so that’s who I’m attracted to working with. I like the element of surprise, so I follow my gut and my heart and just go with it.

Do you have any goals that you’re still hoping to accomplish as a musician or songwriter?

D: I’m about to release an avant-garde sound collage album and I’m working on a scary album of originals.

When you’re not busy with your career, how do you like to spend your time?

D: I enjoy socializing with creative people. Kindred spirits. Cindy and I have lots of cherished friends. When we aren’t with friends, Cindy loves her sewing room, and whenever she goes in there, lots of magic happens. I’m the same with artistic things.

Your daughters both followed you into the rock world. Was this something that you anticipated happening?

D: Not at all. They’re both their own artistic souls. I’m proud of them, but everything they’ve done, they’ve done on their own terms. The only input Cindy and I have had is by example, I think. We all follow our own paths and support each other.

Finally, Dennis, any last words for the kids?

D: Yes, follow your dreams! Rules are for followers. You are your own best statement to the world. What you like is all that should matter to you. Nobody in the world is exactly like you. Whether it’s music, art, writing, or just being a person, be true to yourself. It’s what everybody is looking for.