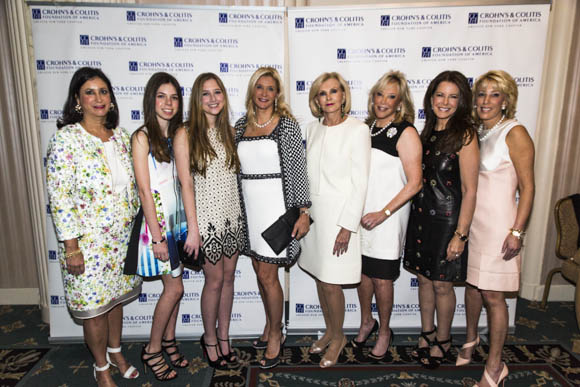 Taylor Sinett, author of the children’s book, Weasel On The Easel.

Nearly one in every 200 Americans have been diagnosed with Ulcerative Colitis or Crohn’s Disease.

To call attention to that grim reality and to people who have overcome their own battles to help support research for treatment and a cure, the Crohn’s and Colitis Foundation of America held its 21st Annual Women of Distinction Luncheon in the Waldorf Astoria Grand Ballroom.

The gala event was hosted by WABC-TV news anchor Liz Cho, and featured a fashion show presented by Bergdorf Goodman, which included the 2014 Evening Collections of Elie Saab, Marchesa and Monique Lhullier. Taylor Sinett’s first book, Weasel On The Easel was on display at the luncheon.

One of the luncheon’s special honorees was 14-year-old Taylor Sinett, from Sands Point, New York, who was selected as this year’s “Rising Star” for her first published book, Weasel On The Easel. The children’s book focuses on the the story of a weasel, named Fredda, who is able to reach her wildest dreams no matter how many times she was told she couldn’t.

The book was inspired and initially intended for Sinett’s older cousin, Casey Mintz, 18, who was diagnosed with Ulcerative Colitis at the age of 11.

“Seeing her struggle so hard is just inspiring,” said the rising young writer. “I hope that those who read my book will find the strength that helps them overcome the disease and learn that you can conquer anything you set your mind to.”

Weasel On The Easel copies were on hand for sale alongside a silent bid at the luncheon. All of the proceeds were intended to benefit the CCFA organization. The Grand Ballroom at the Waldorf Astoria before the CCFA ceremony. Dr. Robbyn Sockolow,  awarded ¨Woman of Distinction in the Field of Medicine.¨

Another of the event’s inspirational honorees was Dr. Robbyn Sockolow who received the award for Woman of Distinction in Medicine for her work in the field of Internal Bowel Disorders (IBD).

Dr. Sockolow is the Director of Gastroenterology and Nutrition and Associate Attending Physician at the N.Y.-Presbyterian Phyllis and David Komansky/Weill Cornell Medical Center. She also happens to be Casey’s doctor.

“It is touching and emotional to be here today,” said Dr. Sockolow. “This organization not only helps people with bowel disorders; it helps the families of the ones affected. Since it’s a hereditary sickness, it becomes a family matter, and events like these help the public get a better idea of Crohn’s and Colitis and the struggle of our patients.”

Though IBD’s are concentrated in the digestive track, the disorders can be so debilitating that they affect many parts of the lives of those afflicted with them. Sometimes it takes carriers every ounce of strength they have to perform even the most basic tasks in their everyday lives.

“It takes away the hopes that these people have of ever achieving their goals, because they’re too afraid of leaving their homes,” said Sockolow. “And what this event does is encourage them to be who they are and not be ashamed of it in anyway.” Casey Mintz, was honored as a “Rising Star,” along with her cousin,  Sinett. Over the years the CCFA has received more than $20 million in donations which have been directed into research. The New York Chapter Board President, Jeffrey Justin, expressed gratitude for that support. “The people who are present today, they recognize the seriousness of what we are doing,” he said. “With every dollar we are one step close to a cure. I won’t have to worry for any of my kids or grandkids suffering from Crohn’s.”

Justin was diagnosed with Crohn’s 25 years ago and suspects he might’ve had it 10 years before that. Once he heard about CCFA, he was compelled to get involved immediately. “To be part of this group of people is simply amazing.” Regional Director of the CCFA, Rhondell Domilici, also offered words of encouragement. She too has suffered as a carrier of Crohn’s, since the age of 12. This is her third year participating as a staff member of the organization. Sh mentioned how important it is for younger sufferers to be open about their struggles and never feel shame for having it.

“You never know who does and doesn’t have it because they’re embarrassed to say so,” Domilici said. “I’ve had my ups and downs, but the truth is this disease can turn us into very strong people at the end of the day.”